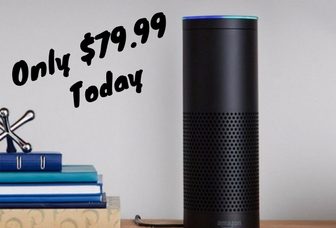 If you’ve been looking for a best deal on Amazon Echo, and don’t mind buying one refurbished, you can order here now for $79.99.

That’s over half off its normal price, and the lowest price we’ve ever seen online since the device was launched back in 2014.

The deal will be only available today, though so you’re going to have to act fast in the coming hours.

Whether you’re looking to use your Echo as a smart home hub, or want to know which fun skills to “teach it” first, we’ve got you covered. Now is a great time to jump into the Amazon Echo ecosystem.

There are ample smart home accessories that work with the Echo, and the device itself has learned a lot through weekly Amazon updates that improve its functionality. By buying one now, you’re getting the best, most feature complete Echo yet, and it’s only getting better.

And if the only thing that’s holding you back is the fact that this is a refurbished deal, don’t worry. Amazon backs it with the same A-z guarantee as a new one, so if it should stop working shortly after you receive it, you’re covered.

As mentioned earlier, this is the best deal on Amazon Echo we have seen, including Prime Day and Black Friday sales, so there’s never been a better time to get one.