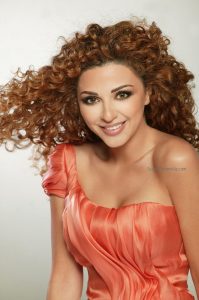 EMI Music Arabia, one of the world’s leading music companies, has announced the signing of major artist, Myriam Fares and her new studio album to the EMI Music Arabia label. What’s being tipped to be the regions hottest Khaleeji album of 2011, ”Min Oyouni” is due to be released on the 19th of May 2011. EMI is very pleased and excited that Myriam has signed with the Label.

The Lebanese star is already a successful artist in her own right, having launched three hit studio albums that have topped the chart within the region. Furthermore Myriam Fares has many accolades that have made her become an iconic star not only confined to the Middle East but also internationally. Myriam has appeared on International TV’s including MTV Europe, Fashion TV (UK)

Not content with just singing and performing; Myriam  Fares also has had time to become a movie star. In 2010, Myriam was cast as the leading actress in the Rahbani hit remake of â€œSiliniaâ€ the movie, which features a poor girl who exposes a community who were living a life of lies.

The new album, ”Min Oyouni” is Myriam’s first fully fledged Khaleeji album that includes four fabulous videos until now and is guaranteed to add an exciting flavour to airwaves and TV across the Gulf. The album includes a variety of Khaleeji styles and Myriam has teamed up with the finest composers and writers to produce one amazing album.