1. An addition of over 135 species brings the total number of aquatic species to over 220, offering exciting new viewing experiences
2. Educational Underwater Zoo experience is a strong family draw 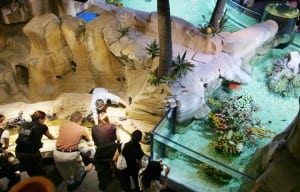 From over 220 diverse species, visitors can gaze at over 70 species in the main aquarium tank, including Sand Tiger Sharks, Rays and Giant Groupers. There are now over 150 species at the Underwater Zoo such as Caiman Crocodiles, Leafy Seadragons, Humboldt Penguins, Piranhas, Otters, Harbour Seals, Water Rats, Terrapins and Eels, among others.

When opened in November 2008, Dubai Aquarium & Underwater Zoo featured over 85 different species, and the new additions have further added to the appeal of the leisure attraction to families flocking to the mall. With the average number of visitors at the mall over 750,000 per week, the new aquatic inhabitants are gaining increasing popularity.

Mr Suresh Bhatia, Chief Executive Officer, Emaar Retail, said: â€œThe addition of new species to Dubai Aquarium and Underwater Zoo has added to their appeal to families. As one of the most popular tourist attractions in Dubai now, it is important that novel features are introduced to the main aquarium and Underwater Zoo. Our team of curators and trained professionals are involved in further adding to the aquatic diversity, thus giving visitors something new during every visit.â€ 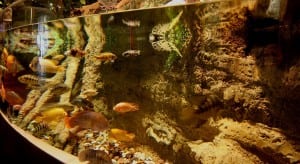 Among the popular attractions at the Underwater Zoo, located on Level 2, are the Humboldt Penguins, which have been named after their personality traits, as well as Harbour Seals, Caiman Crocodiles and Otters. Highlighting the natural growth environment at the Underwater Zoo, the family of Water Rats just got bigger with one of them giving birth to nine babies.

Eight-year-old Yasmin was delighted to watch the penguins and the other animals at Underwater Zoo. â€œItâ€™s nice seeing all these animals so close and the people here are very nice because answer all our questions and I also got to touch the sea cucumbers and horseshoe crabs!â€

Dubai Aquarium & Underwater Zoo holds the Guinness World Record for the largest acrylic viewing panel, and visitors are fascinated with the walk-through tunnel experience. The aquarium now also hosts Shark Dives offering everyone, whether seasoned divers or those who have never dived before, the opportunity to have close encounters with over 33,000 aquatic animals.