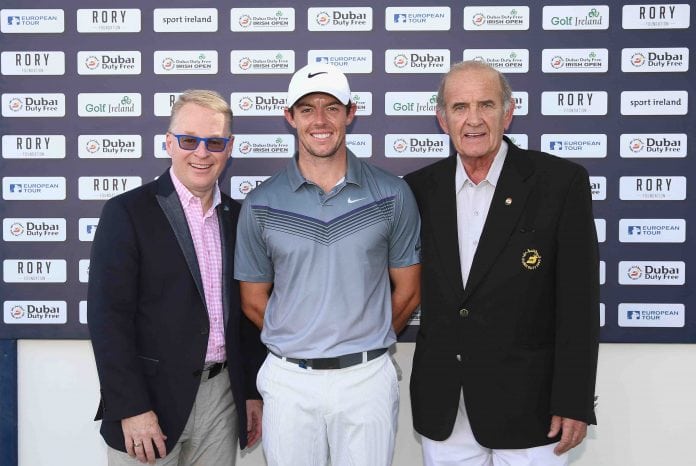 Dubai Duty Free, the world-renowned airport retail operator, has entered a new era in its commitment to the European Tour and the development of worldwide golf, becoming an Official Partner to the Tour in a four-year agreement.

The Official Partnership follows the announcement in May that Dubai Duty Free has extended its title sponsorship of the Dubai Duty Free Irish Open in a similar deal, which is expected to take the naming rights of the event through to 2022.

Colm McLoughlin, Executive Vice-Chairman and CEO of Dubai Duty Free, said: “We are pleased to join a stellar list of companies to become an official partner of European Tour. We have identified marketing opportunities for our brand across several tournaments as well as digital elements that will enable us to engage with our global customers. We are very excited about this partnership going forward and believe it will enhance our existing sponsorship portfolio.”

“This agreement marks an important evolution of our partnership and we are thrilled to welcome Dubai Duty Free to the European Tour Official Partner family. We look forward to working closely with them in future to build their brand awareness and achieve their goal of supporting sport globally.”

In 2017, the European Tour heralded a new era for the game as eight prestigious events were elevated to Rolex Series status, each event carrying a minimum US$7 million prize fund and benefiting from significant enhancements across the board – from fan experience to digital content.

The Dubai Duty Free Irish Open was one of those tournaments, marking another milestone in the event’s extensive growth since Dubai Duty Free came on board in 2015, along with Rory McIlroy and his charitable foundation as tournament hosts.

Their title sponsorship of the island of Ireland’s national Open was the culmination of a long and fruitful relationship with the European Tour which began back in 1989, when the United Arab Emirates city was first put on the golfing map with the introduction of the Dubai Desert Classic.

That relationship continued to bloom over the next four decades as Dubai became an increasingly integral destination to the tour’s significant growth. Dubai Duty Free’s backing extended to the season-ending DP World Tour Championship upon the tournament’s introduction – along with the Race to Dubai – in 2009, before taking the big step in 2015 to assume title-sponsorship of one of golf’s most historic national Opens.

About The European Tour

The European Tour celebrates men’s professional golf on a global stage. In 2018, the European Tour International Schedule will feature a minimum of 47 tournaments in 30 countries, including eight Rolex Series events, all part of the Race to Dubai.

Celebrating the global connectivity of the European Tour and Dubai, the Race to Dubai is a season-long competition to crown the European Tour’s Number One player, an honour which in 2017 went to England’s Tommy Fleetwood for the first time, and which, since 2009, has also been achieved three times by Rory McIlroy, twice by Henrik Stenson, and once each by Lee Westwood, Martin Kaymer and Luke Donald.

Since its formation in 1972, the European Tour has witnessed 26 Members celebrate a total of 52 Major Championship titles between them, enjoyed ten Members attaining the pinnacle of World Number One and has celebrated its diversity as players from 36 different countries have won on the Tour.

The European Tour also manages the Challenge Tour, which featured 27 tournaments in 21 countries in 2017, and the Senior Tour, which featured 16 tournaments in 12 countries in 2017 and which, from the 2018 season onwards, will be known as the Staysure Tour. It is also the Managing Partner of Ryder Cup Europe, the body which, alongside the PGA of America, administers golf’s greatest team contest, The Ryder Cup. In 2018, the 42nd staging of the biennial contest between Europe and the United States of America will take place at Le Golf National, France, from September 28-30.

The European Tour broadcasts live coverage of its tournaments to more than 490 million homes in more than 150 countries every week, generating in excess of 2,200 global broadcast hours for each event. It also enjoys the support of many of the world’s leading business brands with Rolex, BMW, Emirates, Dubai Duty Free and Titleist as Official Partners.

Dubai Duty Free opened for business on 20th December 1983 and over the past three decades has grown to become one of the leading airport retailers in the world with sales turnover of US$1.93 billion in 2017.

Employing 6,000 people, the operation has consistently raised the benchmark for airport retailing and it continues to grow.  Dubai Duty Free currently operates over 36,000 sqm of retail space in Dubai International Airport and a further 4,500 sqm in Al Maktoum International Airport.

In addition to its retail operation, Dubai Duty Free operates a Leisure Division which includes The Irish Village both in Garhoud and Riverland, The Century Village, Dubai Duty Free Tennis Stadium and The Jumeirah Creekside Hotel.

To date, Dubai Duty Free has received more than 600 industry awards including the Frontier Awards for ‘Airport Retailer of the Year in Single Location’, which was won in 2017 by the operation for the eighth time.

A long-time supporter of major sporting events that help to promote Dubai as a leading destination, Dubai Duty Free is proud to be the title sponsor of the Dubai Duty Free Irish Open for the fourth time, which will be held from 5-8 July at Ballyliffin Golf Club in Co. Donegal.