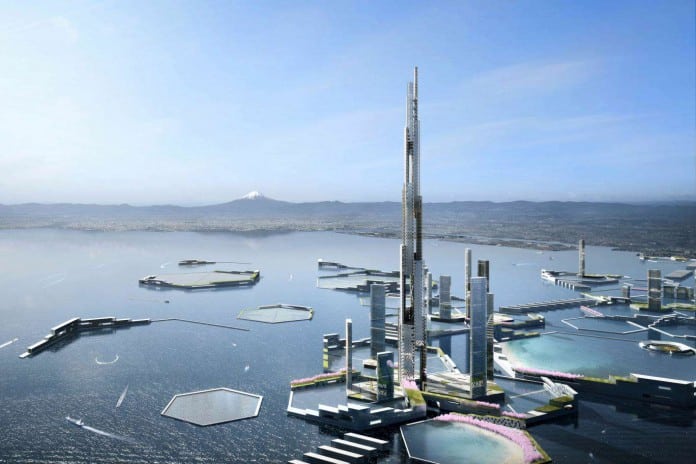 Located in Tokyo Bay, an inlet southeast of the city proper, the plan — dubbed Next Tokyo — wouldn’t just be a single massive building, but if approved would emerge as a mini city designed to combat climate change.

Envisioned as part of Tokyo’s effort to protect itself from rising tides, Next Tokyo would feature a chain of man-made, hexagon-shaped islands. They would form a barrier to protect Japan’s capital from flooding as well as provide the foundation for homes for some 500,000 people. They could be connected by Hyperloop, Elon Musk’s high-speed transit system.

The centerpiece of the plan, naturally, is the 5,577-foot-tall skyscraper slated for completion in 2045. It’s currently being called the Sky Mile Tower and is similarly hexagon-shaped for optimal wind resistance.

The world’s tallest skyscraper right now is Dubai’s Burj Khalifa, which stands at 2,716.5 feet, or roughly half a mile.

Reports say the tower could hold 55,000 people, a full 10th of the city-within-a-city’s population. The building’s facade will collect, filter and store water from the atmosphere, serving as its own apartments’ water supply so that the upper floors don’t have to rely on a traditional water pump.

There will be “multilevel sky lobbies where residents would share amenities such as shopping centers, restaurants, hotels, gyms, libraries, and health clinics,” according to Architectural Digest.

As for elevators? They’ll be ones of the cable-free variety, which can move both vertically and horizontally.

The rest of the project includes plans for farms — some harvesting algae that could be turned into fuel. Wind turbines, solar panels and kinetic energy from the transit system would also help power the megadevelopment.

The idea originally sprang from a 2015 research paper for the Council on Tall Buildings and Urban Habitat.