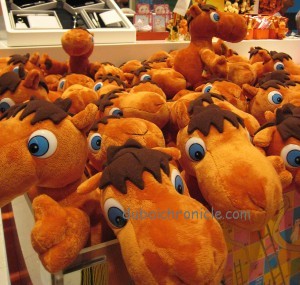 The Emarati orange camel â€œJum Jumâ€ had gained a great success and fame in South Korea after sponsoring the KIFS â€“ Winter Festival which was held last December. â€œJum Jumâ€ enjoys a remarkable attendance among Koreans whom had announced him as one of the major characters for the year 2010.

Since â€œJum Jumâ€ represents the desert life, it had introduced the other lovable animals that live within it. The Korean Children were very excited to learn more about the desert world by one of its most popular inhabitants â€“ the camel, and found it very interesting to get introduced to this magical world.

As the official sponsor of the KIFS â€“ Winter Festival, â€œJum Jumâ€ was featured in different activities that accompanied the exhibition including; the cooking zone, education zone, Arabic fashion zone, and the drawing zone. This is the first time that a local character, created by UAE talents and produced by INDEX Holding; a local Emarati company, achieves this success and acceptance outside the UAE. The success of â€œJum Jumâ€ is just a first step in the recognition of local characters production.

While â€œJum Jumâ€ is the main character in the â€œJum Jum Worldâ€, yet there are some other interesting desert characters in the world of Jum Jum which has become a well known brand in the South Korean market, not only in terms of plush toys, but also as a card game which is gaining a lost of success locally. The card game that was published recently is a group game that tells stories about the desert described by â€œJum Jumâ€ and his friends. The game can also be played online with different contestants from all over the world. The game â€“ invented and developed by INDEX Holding, is a great success for Emarati cartoon production industry.