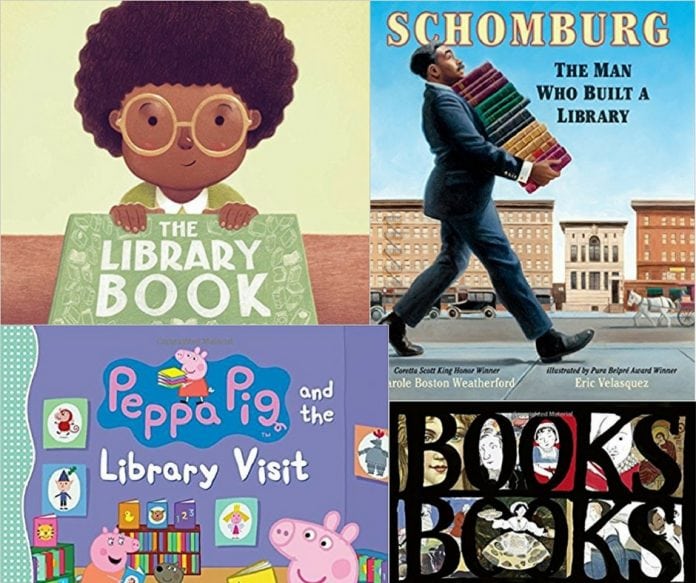 When the weather outside is frightful, families head to the library for fun. Four recent books for young readers ranging from toddlers to teenagers, look at libraries and library visits in amusing, enlightening, and diverse ways. And you can review here a selection of best children’s books. 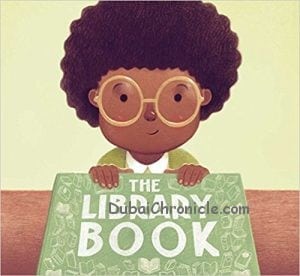 This cute rhyming story, based on the “Library Song,” by authors Tom Chapin and Michael Mark, is charmingly illustrated in contemporary, muted tones by Chuck Groenink. A little girl with big glasses and an even bigger head of curly hair wonders what to do on a rainy Saturday. “Dad worked late last night./ He’s in there snoring./ Same old stuff on TV – boring. /So what if I can’t go out and play./ I know what I’ll do today.” Once at the library, characters in her favorite books come to life and ask her to take them home with her. “The Seven Dwarfs begin to shout, ‘Say, take us with you. Check us out!’ ” If you don’t know the tune, it’s printed on the book’s endpapers (and you can find it on YouTube, too). Young readers will be singing along to The Library Book in no time. 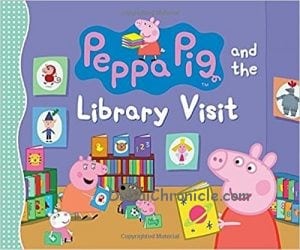 Peppa Pig’s family has a problem. They’ve read all their own books so often that bedtime reading’s become a bore. In desperation, Daddy Pig reads aloud one of his favorites, The Wonderful World of Concrete, which puts everyone to sleep. Mission accomplished, maybe? Based on the TV series created by Neville Astley and Mark Baker — a series so popular that the book is set in a proprietary font, named Peppa — this edition of the piglet’s adventures introduces children to basic facts about libraries (you have to remember to bring books back on time; you can take out a certain number of books at once) while encouraging enthusiasm about reading. Candy colored illustrations and green polka-dot end papers make Peppa Pig and the Library Visit a very appealing package. 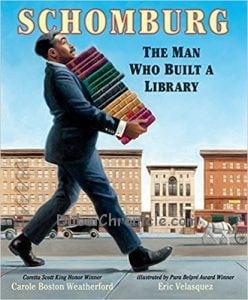 Schomburg: The Man Who Built a Library is a big, handsome treasure trove of African-American history, with emphasis on the heyday of the Harlem Renaissance. Schomburg, born in Santurce, Puerto Rico in 1874, wondered, as a child, about the history of his people that “his teachers did not teach.” A true autodidact and bibliophile, he learned about that forgotten past by searching out lost literary works. His personal collection ranged from poems by Phillis Wheatley to nonfiction volumes by Paul Coffee, a whaler who was also “one of the richest black men in early America.” Eventually, Schomburg’s collection became too large for him to house, and he approached the New York Public Library, which acquired it through a gift from the Carnegie Corporation. “Today,” Carol Boston Weatherford writes, “the Harlem library bearing Schomburg’s name boasts more than ten million items, a beacon for scholars all over the world.” Time for a visit? 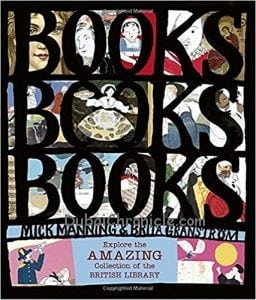 This gorgeously illustrated picture book provides a first-class introduction to one of the greatest libraries in the world and a lively history of some of the most significant books in English – as well as a few in Latin and Anglo Saxon, e.g., The St. Cuthbert Gospel and Beowulf. In Books! Books! Books!: Explore the Amazing Collection of the British Library, veteran collaborators Mick Manning and Brita Granstrom give their pages a collage-like effect, layering images from the books themselves with sketches and short bursts of explanatory text. Books! Books! Books! would be the perfect companion for a tour of the actual library in London, but for young readers with real curiosity about book history, curling up with this attractive and engaging volume might be even more fun than a transatlantic flight.