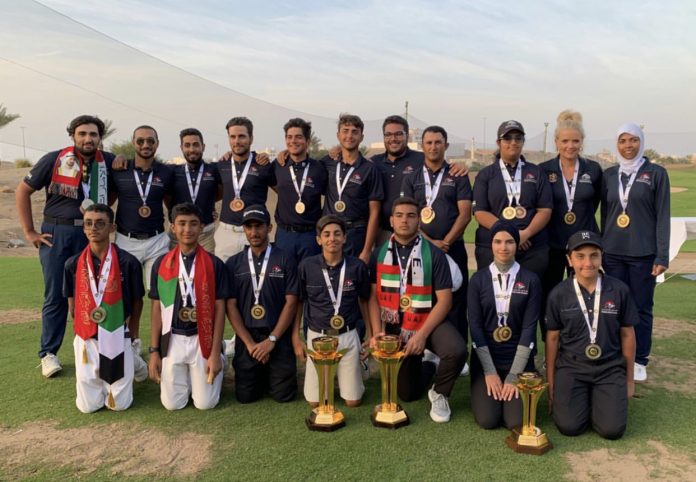 In the Men’s Division, the UAE Team finished in Third Place winning the Bronze Medal. Lead Ahmad Skaik who captured the Bronze Medal in the individual category. Skaikshot rounds of 74-77-73-69 for a championship total of 293, one shot behind than the overall winner. Skaik’s final round (69 – 3 under par) was one of the lowest rounds on the final day providing the UAE Team the comeback they needed to reach the podium.

Last year’s individual silver medalistKhalid Yousuf finished in 9th place shooting a tournament total of 301 for another Top 10 finish to add to his resume.Abdulla Al Qubaisi had a consistent weekend placing 10th overall with a final score of 308. Playing in his first international event for the UAE this year Hassan Al Musharrekhfinished with a tournament score of 326, just inside the top 20. Bahrain finished with the Team Gold and the Kingdom of Saudi Arabia finished with the Silver

The UAE Ladies Team dominated the field as they claimed the Gold Team Medal by 53 shots. Reema Al Heloo was the overall Championin the Ladies Division with rounds of 80-86-87 for a championship total of 253. Collecting the Bronze Medal was Alia Al Emadi and coming in Fourth Place just one-shot back was Hamda Al Suwaidi.

In the Junior 18 & Under Division the UAE Team won the Silver Medal. Winning the division was Qatar and coming in Third Place Bahrain.

Leading the way and winning the Bronze Medal in the individual category for the UAE Junior 18 & Under Team was Rashid Al Emadi. Rashid has had a busy month playing in the Men’s Pan Arab Championship in Morocco and now competing a few days after in the GCC Golf Championship on the 18 & Under Team. This week Rashid shot rounds of 89-80-73 for a championship total of 252.

Having a strong performance for the 18 & Under Team was Rayyan Al Maazmi. Finishing in Sixth Place with an overall score of 260 Rayyan will be a key individual to watch in this event over the next few years. Rounding out the 18 & Under team was Hami Faqihinejad with a tournament total of 266.

Gold was won in the Junior 15 & Under Division for team UAE. After finishing tied with Oman the UAE had the lowest third round score which gave the UAE the Team Gold Medal. Obaid Al Heloo was the determining factor for the team with rounds of 77-83 but his final round of 74 was the lowest for the day and jolted the UAE to the top. Obaid finished with a score of 234 over three rounds while collecting the Silver Medal in the individual category.

Having solid performances was Mohammad Ahmed Haj and Abdullah Al Suwaidi as the finished 6th and 7th in the individual category.

Closing out the championship, the UAE 13 & Under Team won the Silver Medal. The Al Jassmey brothers lead the way as they both finished with the same score of 181. Rashidfinished in Second Place with the lower final round score and Sultan finished in Third Place for the individual category. Mohammad Skaik was not too far behind just trailing by two strokes and finishing in 5th Place with a total score of 183.

“The course was really in top conditions with fast greens and perfect fairways. The Men’s Team had a very strong comeback and a great final round from Ahmad Skaik after a tough start. With Yousuf’s even-par and Al Qubaisi 4-over we gained 15 shots on the last day,” said Samir Wallani the UAE National Team Coach.

“In each division we had some kind of comeback besides the Ladies who just dominated since the first round. It just goes to show that you need to stay positive and never quit and that’s what we did. I am so proud of these teams they showed heart and teamwork,” Coach Samir added.

Moving forward the teams will focus on the Emirates Golf Federation Order of Merit events and training camps that will be coming up. The UAE Presidents Cup will be coming up in February and all players will be looking to be crowned the next UAE National Champion.

Continue to follow the UAE National Teams on the Emirates Golf Federation social media pages and the Federation website at www.egfgolf.com.