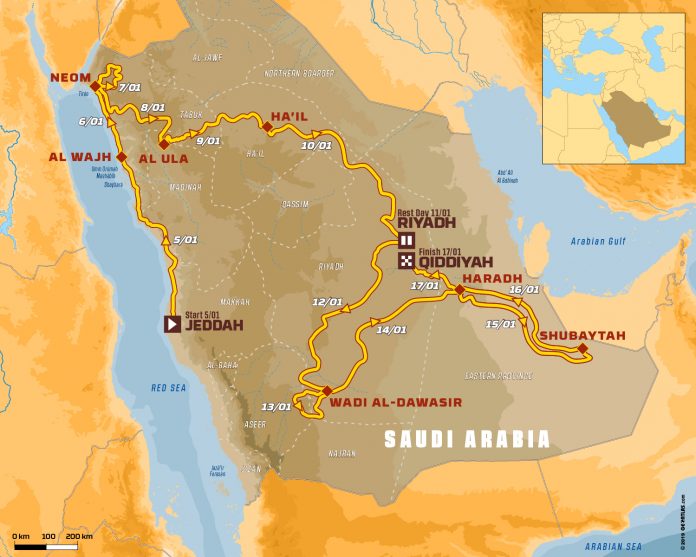 Organisers of the Dakar Rally Saudi Arabia 2020 have officially confirmed route details of the world’s most challenging rally race, which comes to Asia for the first time from 5 to 17 January 2020.

Welcoming Rally Dakar as “an event of immense global appeal” that shows the kingdom’s passion and obsession of motorsport, HRH Prince Abdulaziz bin Turki AlFaisal, Chairman of Saudi Arabia’s General Sport Authority, said: “We have the privilege of launching chapter 3 of the Dakar story, introducing the race to Asia for the first time, where no country better describes the diversity of desert terrains this continent has to offer than Saudi Arabia.”

“Dakar Saudi Arabia 2020 will go through various terrains and sceneries, unveiling the kingdom’s breath-taking scenery, and will be an exciting opportunity for the world to see the real Saudi Arabia, to meet its generous people and to experience first-hand how we are driven by ambition, professionalism and the steadfast desire to succeed at the highest levels,” he added.

Addressing more than 200 media outlets and broadcasters at a specially hosted press conference on Wednesday 20 November at the Arab World Institute in Paris, HRH Prince Khalid Bin Sultan Abdullah Al Faisal, Chairman of the Saudi Arabian Federation of Motor and Motorcycle Sports, and Rally Dakar Director David Castera confirmed details of the 12 Dakar Saudi Arabia 2020 stages in the presence of a number of Dakar pilots.

“Saudi Arabia and Rally Dakar come together to write a new chapter of achievements in the world of motorsports, a chapter headlined by the challenge of discovering a new land and written by the warm hospitality the Kingdom and its people have to offer.” HRH Prince Khalid Bin Sultan Abdullah Al Faisal said.

“Through this inaugural rally, the world will see our breath-taking desert, our vast land, and will also meet its generous people.

“We want the world to see our fascinating desert waiting for the adventurous stories to be told. We want the world to see, first-hand, the warm and generous hospitality the people of Saudi Arabia have to offer. We are eager to welcome the world to our country, and to witness our vision, capability and professionalism in hosting the biggest sporting events at the highest levels,” he added.

Extending over 7,500 of the kingdom’s vast and unexplored desert, Dakar Saudi Arabia 2020 gets underway in Jeddah before drivers and crews navigate their way through the fast and winding dunes and stones for 752km.

The intimidating challenge continues up north along the coast for nearly 900km through the Red Sea Project till it reaches the futuristic megacity of Neom, where the marvellous journey reaches its highest point at an altitude of 1,400 metres amid a series of canyons and mountains.

A combination of sandy stretches and gravel await Dakar’s thrill-seeking competitors as they cruise next through 676km of the formidable trip from Neom to Al Ula in Dakar’s fourth stage before the sandy hills of Ha’il put the navigation skills of competitors to the test while descending south onto Riyadh.

A rest day in the capital will be followed by Dakar Saudi Arabia’s longest stage of 741km as the route takes a turn to the west in the centre of the kingdom’s enormous desert before looping back towards Haradh in the eastern governorate of Al Ahsa, marking the entrance to the Empty Quarter and building up to the grand finale in Qiddiya, a future entertainment, sports and cultural destination, where the winner will be crowned on the final podium.

Highlighting the magnitude of competing in Dakar Rally and finishing the unnerving challenge, Castera said: “Crossing the Dakar finish line is nothing short of living the dream. You can do it on your first go, and sometimes your hopes may be dashed, but ultimately perseverance and clever strategy are most often rewarded. The happiness of these drivers and co-drivers also translates to the satisfaction of the organisers.”

“In Africa, then in South America and now in Saudi Arabia for the launch of this new chapter, this extraordinary rally has always strived to accompany its competitors in the ultimate quest,” the Dakar Rally director added.

Pilots from more than 62 different nationalities and six continents have registered to experience the unchartered and spectacular terrain of Dakar Saudi Arabia 2020, where they will drive specially modified vehicles, trucks, quad, SxS, and motorbikes, designed to handle 12 stages of various challenging terrains.