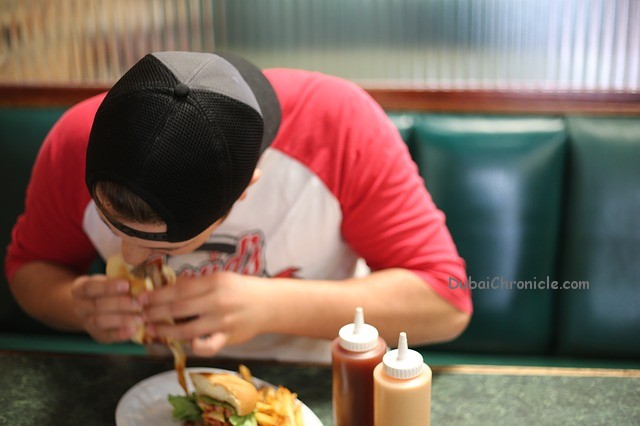 Arab men are being warned that it’s good food, not good genes, that gives the Middle East a low rate of prostate cancer, and that too much Western-style food could cause a dramatic increase in their risk of developing the disease.

Prostate cancer is the second most common form of cancer worldwide, and the most common in wealthier nations, but rate varies dramatically between countries. World Health Organization (WHO) research released last month found Norway, Sweden, and Ireland had more than 10 times as many instances of prostate cancer as in Saudi Arabia, Egypt, or Jordan.

Dr. David Levy, M.D., a urologist at Cleveland Clinic in the United States, said that risk could change quickly if Middle East men adopt a burger-and-fries Western-style diet in place of traditional meals. In the United States, second-generation Arab-Americans suffer far higher levels of the disease than their counterparts in the Middle East and North Africa as their diet becomes more American.

“When you drink sugary sodas and fruit juice, and eat candy, cakes, and animal-based protein, your insulin resistance factors go up, your glycemic index changes, and you adversely affect the fatty acid ratios,” he said.

“You have changed the entire environment in which the cells live. And that changes the genetic behavior. It is a lifestyle dietary response, resulting in an environmental change, that, in my mind, as far as we can tell, invites an increased incidence of prostate cancer.”

Dr. Levy observed that when Arab men first move to North America or Northern Europe, their rates of prostate cancer do not initially diverge significantly from those of their counterparts back home. Yet their sons, born and raised in the West, display similar levels of the illness as their peers of European descent.

“When men of Middle Eastern and North African origin adopt a westernized lifestyle, their risk reverts to that of the majority of the westernized population, and that is substantially higher,” he said.

“I think dietary factors have a very, very strong role in that.”

Dr. Levy’s observations are consistent with findings of a study carried out at the American University of Beirut. Researchers Lara Hilal and Mohammad Shahait explored the differences in cancer risk factors, incidence, distribution, and control of the disease between the Middle Eastern Arab countries and some developed countries in Europe and North America. ‘ Prostate Cancer in the Arab World: A View From the Inside’ is their review of the medical literature on the subject. Like Dr. Levy, they cited “the metabolic syndrome paradox, and the protective effect of the Mediterranean diet on a subset of the Arab population.”

Part of this is due to affluence, as higher incomes encourage people to eat more of the food that is bad for them.

Dr. Levy said the consumption of meat and dairy produce was particularly problematic due to the distribution of fatty acids within these foods. While both omega-3 and omega-6 are essential nutrients, he said, quantities of the latter should not exceed the former by more than five times.

“The fatty acid ratios in the blood that are associated with animal protein consumption are consistent with higher trends in prostate cancer diagnosis,” Dr. Levy said.

“If you change the diet, you change the immune system responses from the small intestines, which then have cascading events genetically throughout the body.”

Dr. Levy said: “Men with all of these conditions have an increased likelihood of developing prostate cancer – and they are far more common amongst followers of the Westernized diet than of those on Mediterranean or plant-based diets. We see the correlation not only with prostate cancer, but also breast, colon, and pancreatic cancer.”

Foods such as French fries, hotdogs, burgers, and chicken wings are high in omega-6s. Conversely, the Mediterranean diet is believed to have a protective effect against some tumors; in studies of men with untreated prostate cancer, eliminating meat and dairy from the diet resulted in a significant decrease in the rate of prostate cell growth. The cuisine of the Eastern Mediterranean region, which includes the Levant and North Africa, features an abundance of foodstuffs rich in omega-3s, such as lentils, tomatoes, eggplant, walnuts, broad beans, and pomegranate.

Dr. Levy tells his prostate cancer patients to limit red meat to three portions per month at most. He also encourages them to eat plenty of fresh fruit and vegetables, and cut down drastically on dairy and sugary food. Limiting one’s intake of refined carbohydrates – ‘white’ bread, sugar, pasta and rice – in favor of ‘brown’ or wholegrain varieties is also recommended.

He added that some nutritional deficiencies, such as low levels of Vitamin D, were also problematic when they occurred alongside conditions such as metabolic syndrome. Night-shift workers, vegans, and veiled or hijab-wearing women are often deficient in the substance, which is absorbed through the skin from daylight and also occurs in eggs and fish.

“A diet that is high in meat, dairy, and sugar – and low in vitamin D – changes the entire environment in which the cells live,” Dr. Levy said.

“It’s similar to growing plants. If you put a seed in the ground and give it nitrogen, but no calcium, magnesium, phosphorus, potassium, or zinc, you won’t get good tomatoes.”