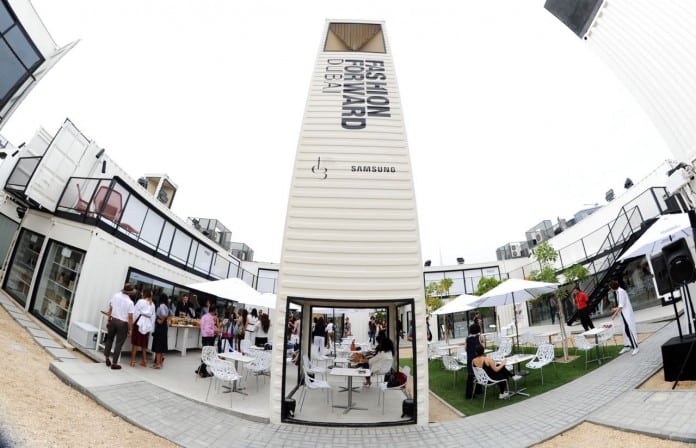 FFWD will shine the spotlight upon the region’s well-known couture, ready-to-wear and accessory designers who are confidently carving a space for their labels in the international fashion landscape after several successful showings at FFWD. As well as seasoned FFWD designers, and following through on its commitment to introduce new talent to the fashion community, FFWD are debuting thirteen designers this March.

ABED MAHFOUZ – presented by LUX – will grace Fashion Forward this season with a highly-anticipated runway presentation.

ANAYA is a contemporary women’s wear designer label launched in Dubai in 2011.

AMATO BY FURNE ONE – Known for his natural ability to craft extravagant and artistic designs, Dubai-based Furne One has rapidly worked his way up the fashion ladder, and is celebrated both regionally and internationally for his impressive couture creations.

ARWA AL BANAWI – Like her eponymous label, Saudi-born designer Arwa Al Banawi is an eclectic mix of contrasts. Designed for the subtle woman, her aesthetic is both classically cool and undoubtedly feminine – earning her recognition from Vogue.com and a finalist position at Jeddah Vogue Fashion Experience.

ASYA KRASNAYA is a Dubai-based fashion brand showcasing its Jewelry line this season at The Showcase. The brand was founded by two Russian born sisters living in Dubai and creating out of Dubai Design District (d3). The brand is inspired by their childhood days in Russia with a twist of a powerful, modern-day woman, who is working around the clock.

BEDOUIN – Designed and developed by Central Saint Martins’ graduate Andraya Farrag, BEDOUIN is a contemporary womenswear label that aspires to create flattering, easy-to-wear collections with a confident, spontaneous style. Sleek designs with a combination of relaxed silhouettes and feminine materials; simplicity is key in every collection.

BY SADEEM – A prêt-a-couture fashion brand by Saudi designer Sadeem Alshehail centered on creating collectible high-end pieces for a woman who is confident, elegant and sophisticated.

CHEYMA – Born in the capital of fashion Paris, Cheyma graduated from the Institute of Political Sciences of Paris with a Masters in Fashion & Luxury Marketing. She worked for some of the most prestigious fashion brands in Paris including Christian Dior Couture, Chloé, and Saint Laurent Paris, with digital experience at Lacoste, from which she got her sportswear touch. Cheyma describes her aesthetic as whimsical and ethereal.

EMPEROR – in collaboration with Reebok – will return to Fashion Forward with its ‘See Now Buy Now’ collection.

GHUDFAH is a luxurious abaya and ready-to- wear line that caters to the elegant women designed by Sarah Albaz who was born and raised in Riyadh.

HESSA FALASI – An Emirati brand, established in 2011 in Dubai is inspired by the Arabic culture.

HUSSEIN BAZAZA –  The brand is based on a merge of classic and modern fashion; feminine but edgy. Bazaza’s ready-to-wear line is a combination of wearable pieces and couture details with lace collage and, geometric cuts, story-telling prints and intricate details.

KRISTINA FIDELSKAYA is a Dubai-based label by designer Kristina Fidelskaya who mixes vintage styles with her current cultural fascinations.

LAMA JOUNI – Launched in 2013, the Paris-based Lebanese designer produces high-end ready-to-wear with its own unique style and bold designs.

MICHAEL CINCO – The Dubai-based designer is best known for his fabulous gowns, demonstrating innate creativity and masterful technique and has amassed an army of international celebrity clientele.

NAFSIKA SKOURTI – presented by EPIC – Half Greek, half Jordanian and creator of the contemporary brand Nafsika embraces new ideas and modern clothes.

ROYALED by RH – Crafted for the modern-day women Royaled is a prêt-a-couture brand offering collections that can be worn all year round; seasonless and timeliness.

STARCH FOUNDATION – Under the mentorship of Rabih Kayrouz, the Starch Foundation has presented their chosen designers at each edition of FFWD to great acclaim. The designers this season are: Rony El Helou – from South of Lebanon has had a passion for fashion design since childhood, making clothes out of household items such as plastic bags. Diana Wassef, Fashion Creator of Emily Cremona, with her sustainable design, and using natural dyeing techniques and fibers, and Nour Najem will present her eponymous label.

TAIR – t a i r was created in 2013 in Dubai by Aliya Tair who finds an ultimate inspiration in far eastern aesthetics and a uniqueness of modern time.

VAROIN MARWAH – Dubai-based fashion designer of Indian origin will present his signature style of imperial inspired menswear for the second time this season.