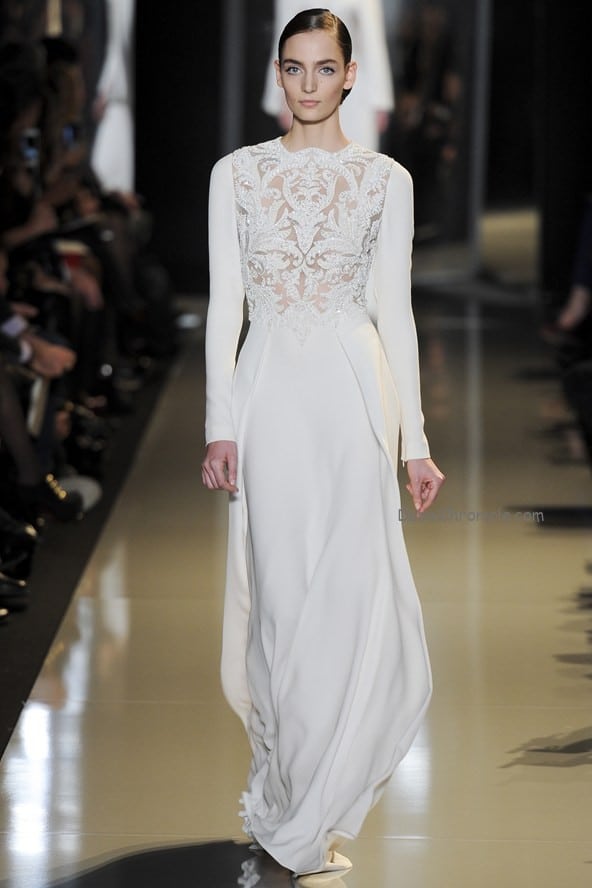 Paris Haute Couture Autumn/Winter 2014 week is towards its end. Many of the world’s most famous designers presented their extravagant visions for the upcoming 2014 season. However, this time the event was different. Haute couture seems to be finding its way back to the center stage of the world of fashion. This edition of Paris Haute Couture was extended from three to five days and it included more than ten of the some of the top houses today. In addition, names like Armani, Versace and Schiaparelli made their comeback in Paris. Here are some of the highlights from the fashion event.[wpsr_retweet]

Versace’s autumn/winter haute couture collection was anything but innocent. Dresses with bold slits, large fur coats and asymmetrical designs. Simply said, the collection is fascinating and extravagant, such as Versace’s trademark and that is why Donatella was applauded for this daring collection.

Raf Simons’ collection for Dior was entitled “Encyclopedic” and covered various centuries. Like a journey back and forth in time, the designer had taken the best of all styles by adding a contemporary touch to them. There were large French ball dresses refreshed with trapeze-like shapes, Edwardian coats which impressed with their simplicity and lots and lots of heels. Simons obviously relied on stilettos to make silhouettes look longer and more dramatic.

One of the most romantic haute couture collections presented in Paris was that of Elie Saab. The Lebanese designer showcased transparent sheath dresses and skirts inspired greatly by the theme of light, which seems to be Saab’s latest obsession. Colours were dreamy and fabric – revealing. Despite that, the final result was very elegant and almost Disney-like.

Unlike Raf Simon’s collection, Lagerfeld had decided to take it easy on the high heels. Models took over the runway in comfy sandals. Also, there were no exaggerated and over-embellished dresses. They were all replaced by skirts over sandals. The highlight of the collection was its closing. Pregnant Ashleigh Good showed up in a wedding dress, which triggered series of applause from the audience. Many celebrities stopped by to see Chanel’s autumn/winter 2014 collection. Among them were Kristen Stewart, Jared Leto, Lily Collins and Nina Dobrev.

Giorgio Armani Privé Couture’s Fall 14 collection was one of the few that failed to impress. It features a strange mixture of short dresses and gowns that almost dragged on the floor. Also, the show was dominated by three colours – red, black and white. Most of the models appeared either with covered faces or with massive headpieces taking the focus away from the dresses.

Pierpaolo Piccioli and Maria Grazia Chiuri were the designers behind Valentino’s autumn/winter 2014 haute couture collection. Similar to Chanel’s collection, flat sandals dominated and heels were not part of the plan. The general feeling was very relaxed thanks to the beautiful lace embroidery, feathered gowns and coats, as well as the solid colours. Kim Kardashian was one of the celebrities that were present at Valentino’s show.

Gaultier’s fall 2014 haute couture vision was probably inspired by vampires. There was definitely an overdose of red lipstick, an abundance of leather, metallics and dark makeup. The show was closed by bearded singer Conchita Wurst who showed up in something like a vampire wedding gown.

As always, Paris Haute Couture Fall/Winter 2014 was a hub of celebrities over the last one week. Apart from Kristen Steward, Kim Kardashian and Jared Leto, Jennifer Lawrence, Jennifer Lopez and the new Hollywood couple Sean Pen and Charlize Theron were also taking the front rows.