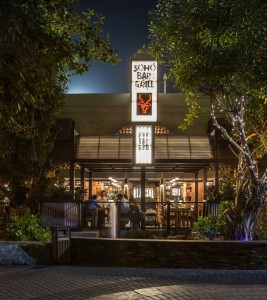 CHI Hospitality, a group with industry expertise and a diverseportfolio of F&B outlets across Dubai, announced the official opening of its’ all new SoHo Bar and Grill during the launch held at the venue on March 12 th , 2013.

SoHo Bar and Grill is a contemporary eatery boasting an edgy stripped back deconstructed New York-inspired interior, spreading over an inside and alfresco dining area, and seating up to 170 people.

Top, trendy SoHo Bar and Grill was subjected to close scrutiny when members of the local media and VIP guests turned up to capture the buzz around the opening night. What they found was a stylish bar and grill with a unique design, offering an extensive selection of meaty meals including a real 1.2 kg Tomahawk Steak, Rack of Lamb, Rib eye on the Bone, and topping off the SoHo Menu — SoHo Beef Degustation with beef served in seven different ways over seven courses. 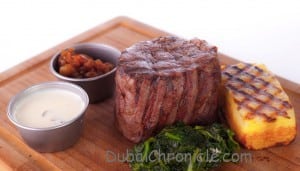 Guests got to experience the mouthwatering bold flavors of the SoHo menu, SoHo signature cocktails, hand cut steaks and chops, all together with a forward-thinking atmosphere to match. “This lively, buzzed eatery is designed for people to get together and enjoy their food in an uplifting  upbeat environment,” said Ara Nakhnikian, CEO of CHI Hospitality. “SoHo Bar and Grillis perfect for a big night out, for people who celebrate living, and that’s what we did with the opening — a big Media Night Out,” he added.

One of the unique things about SoHo is the restaurant’s specialties, prepared via three plus cooking methods. SoHo Buffalo wings, for instance are first marinated, then smoked, chargrilled and oven baked in their own sauce, as opposed to conventional deep frying.“It’s a fantastic venue and a great addition to the social scene in Century Village,” said George Horan, President of Dubai Duty Free, one of the guests at the event. “We wish SoHo Bar andGrill every success and look forward to their upcoming promotions and events,” he added.