The addictive American teen drama television series Gossip Girl will return to small screens across the world for its final season on Monday, October 8.

Gossip Girl will be closing its doors after the sixth season, but before that the veteran drama is adding a fresh blood. In its final 11 episodes, the drama will include a Dubai-profiled character.

Andrea Gabriel has landed a recurring role as a businesswoman from Dubai, according to industry insiders. How her character will blend into the lives of the Upper East Siders from Gossip Girl remains to be seen.

Born 4 July 1978 in Los Angeles, Andrea Gabriel is an actress who is best known for her role on the American Broadcasting Company show Lost as Sayid Jarrah’s love interest Nadia Jaseem. 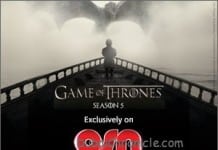 “Game of Thrones” Season 5 in UAE, Exclusively on OSN

A new concept of Arabic novels