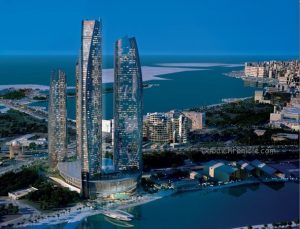 Oil continues to account for about half of GDP, with non- oil activities achieving notable growth, including the manufacturing sector, which increased by 10.8%.

Supported by increases in oil revenues and government spending, the emirate’s GDP is projected to grow in the range from 6% to 8% in 2012.

Governmental efforts in Abu Dhabi remain dedicated to investing in the diversification of the local economy.

The government’s move to develop free-trade zones, in line with its long-term plan to boost the role of the private sector in the economy aims at turning it into a driver of economic growth in the future.

The government’s general strategy is designed to shift its role from provider to regulator, putting the private sector at the heart of Abu Dhabi’s economic development.

The commitment of the government to continue spending on infrastructure and other development projects in various areas has led to the revival of the local economy.

Rise in industrial activities reflects the efforts exerted by the governmental authorities to promote this sector as one of the pillars of sustainable development.

Manufacturing base gets a boost from the continued development of the Khalifa Industrial Zone Abu Dhabi (KIZAD), a 420-sq-km industrial area that was launched in 2010 and will eventually be integrated with Khalifa Port. By 2030, the zone is expected to account for 15% of the emirate’s non-oil GDP, in addition to providing around 100,000jobs. Until the end of the first half of 2011, more than 100 firms had applied to set up operations at KIZAD. Performance of the zone in terms of attracting foreign investors reportedly exceeds projections.

The twofour54 free zone, designed as a media hub and home to the regional offices of CNN and the BBC, has been in operation since 2008.

Advantages of free-trade zones in Abu Dhabi include 100% foreign ownership; certain tax exemptions, and discounts on energy and land costs.

Despite minor delays in the tourism sector, the emirate is also continuing to encourage contributions from international investors who could include expertise and technical capacity, in addition to capital, all of which are potentially important factors in helping the emirate shift away from its traditional economic dependence on the hydrocarbons’ sector and create jobs for its citizens. The three museums – Abu Dhabi branches of the Louvre and Guggenheim, plus the Zayed National Museum – will become a part of an art and culture complex located on Saadiyat Island.