The secret life of forgotten toys, a magical tree, a quest to recover the silver that transforms day into night and the classic Christmas tale of an enchanted nutcracker are some of the stories included in this yearâ€™s â€˜Cinema for Childrenâ€™ segment at the Dubai International Film Festival 2010. 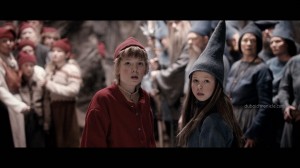 From Poland, the fast-paced The Magic Tree, one of the most awarded childrenâ€™s films of the year, begins with a huge old oak tree cut down by people unaware of its power. The hundreds of objects made from its wood retain the treeâ€™s mysterious powers, including a red chair that can walk, fight and fulfill the wishes of anyone who sits on it. When the chair finds its way to a new home with three young children, itâ€™s the start of a series of incredible events.

From Japan, Oblivion Island: Haruka and the Magic Mirror suggests what happens to childhood treasures after we become adults. Sixteen-year-old Haruka accidentally stumbles upon a host of unlikely creatures who sneak into our world from a different dimension to gather the ditched and forgotten memorabilia and use them to build their own city. The award-winning film combines Japanese anime with Western-style 3DCG animation.

A second animation film, Eleanorâ€™s Secret (Kerity: La Maison Des Contes) from France, tells the story of a young boy who fights to save fairytale heroes. Although he isnâ€™t interested in reading and doesnâ€™t read very well, seven-year-old Nathaniel inherits his auntâ€™s collection of old books. When his parents decide to sell the books, Nat realizes they are the only shelter for the timeless characters of childrenâ€™s literature, including Peter Pan and Alice in Wonderland. If the books are sold, they and their stories will disappear forever.

Elsewhere, deep inside the Norwegian mountains, blue gnomes guard the silver that transforms day into night. When the silver is stolen, gnome princess BlueRose has to overcome her fear of the outside world to retrieve it and save the world from darkness â€“ and thus begin the adventures of Magic Silver

Myrna Maakaron, programmer for DIFFâ€™s Cinema for Children segment, said each selected film has been well received internationally and is sure to delight UAE families, children and the young at heart.

â€œThis year the segment presents an eclectic mix of whimsical, entertaining, and imaginative films that will appeal to kids and adults alike,â€ Maakaron said. â€œWeâ€™ve got stories of adventure, fantasy, childhood heroes and festive cheer, slices of different cultural backgrounds. These very special films are not only highly entertaining, in many cases they share valuable lessons.â€

The â€˜Cinema for Childrenâ€™ programme will be led by the star-studded The Nutcracker in 3D, based on the same story that inspired the world-famous Tchaikovsky score and ballet. The film tells the story of nine-year-old Mary (Elle Fanning) whose dull Christmas is livened up after the arrival of her Uncle Albert (Nathan Lane) and his gift of an enchanted nutcracker. On Christmas day, the nutcracker comes to life and takes Mary on a journey into a magical world of fairies, sugarplums and other Christmas toys come to life.

In addition to cast members John Turturro, Frances de la Tour and Richard E. Grant, the film also features eight new songs from Oscar-winning lyricist Sir Tim Rice of The Lion King and Evita fame. The Nutcracker in 3D will be the Cinema for Children red carpet gala screening and will have its international premiere in Dubai on December 17, 2010.

For more and updated information about DIFF, please visit www.dubaifilmfest.com