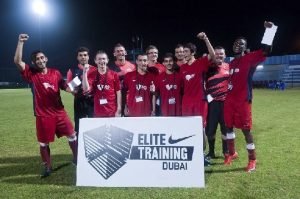 The Nike Elite Football Training finale took place at Al Nasr club last night where five local teenagers between the ages of 16- 19 have been selected for further training at Juventus FC in Italy. A total of 250 football obsessed teenagers competed in this grass-roots initiative by Nike which aims to scope out the best talent in the region and give them the opportunity to train like professional footballers. Six players from the UAE National Football team attended the finale to show support for youth football development in the region. â€œThis is a dream come true, I want to represent the UAE and Nike has given me the opportunity to travel to Juventus FC this summerâ€ said Mohammad Motasem, one of the five talented winners. After the five winners were announced, Coach Tommy Wingrove proposed a surprise opportunity for one boy to travel to FC Barcelona for a day to participate in the Nikefootball+ experience. The challenge required mimicking a move of Fernando Torres, Abdallah Omar Alashqar who replicated Torresâ€™ move perfectly will be heading to FC Barcelona mid April 2010.