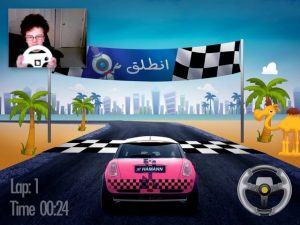 In a first for the Middle East, the popular Arabic childrenâ€™s comic book character Majid is all set to move a step closer to his audiences with a new Augmented Reality (AR) game, in celebration of its 32nd year anniversary.Â  The Abu Dhabi Media Company (ADMC), the publisher of Majid, announced today that the February 24 and March 3 editions of the magazine will feature a â€˜magicalâ€™ page which, when held up to a webcam, will overlay the usersâ€™ real world surroundings with computer generated imagery, creating an interactive â€˜mixed realityâ€™ environment.

AR technology, which has been taking the media and entertainment industry by storm over the past few months, will allow fans to enter a Majid-themed world on their computer screens and even play an interactive racing game with Majid. Readers will have access to the mixed reality world by downloading special software from Majid.ae and holding up the designated magazine page to their webcams. This will launch an environment, which users will be able to explore simply by rotating the magazine in front of the webcam, while the game will be controlled via a keyboard.

“Weâ€™re constantly looking for new ways to engage our audiences, with new content and experiences across our range of media platformsâ€, said Ricky Ghai, Executive Director of Digital Media at ADMC. â€œWeâ€™re bringing a novel AR application which builds on Majidâ€™s strength and brand legacy, while tapping into the pulse of the technology in the Middle East. The combination of audience content collaboration and exciting technology represents an example of what cross platform interaction is about, and weâ€™re looking forward to the reaction from Majidâ€™s print and online audiences,” added Ghai.

The â€˜magicalâ€™ page in the AR-enabled issue of Majid will contain a printed â€˜markerâ€™, which, when held up to a webcam, triggers the digital recognition software downloaded from the magazineâ€™s website. This in turn launches an interactive environment allowing users to experience the mixed reality environment.

â€œThis is an example of one of the many areas where ADMC media platforms complement and complete each other, in order to create experiences that deliver wonder, curiosity and discovery for our audiences, while opening up an entirely new advertising paradigm for marketers and media buyers to generate multiplatform touch points and a richer connection with their customersâ€, explained Victoria Mirauer, Director of Marketing and Online Services Digital Media, at ADMC.

US-based ABI Research estimates that the industry for AR applications will be worth US$350 million by 2014, considerably up from the mere US$ 6million mark in 2008.

Clearly, augmented reality is gaining momentum and popularity with advertisers, retailers and marketers due to its unique ability to engage consumers in their experience with a brand. Successful mainstream consumer campaigns, such as Night at the Museum Two, Coraline, MINI, BMW, Hugo Boss, Lego, and most recently Mattelâ€™s toy line made for James Cameronâ€™s Avatar, make the impact of augmented reality applications clear, and hint to its unlimited potential.

Noah Khan, Director of Technology at ADMC said: â€œAugmented Reality is a very exciting and promising technology. In addition to new game concepts business, commercial and marketing applications, AR is a great breakthrough for the media and entertainment industry, which has a reputation for creativity and pushing boundaries through the use of new and innovative technologies such as this. This is just the beginning of greater connectivity and interaction with our audiencesâ€.

An award winning weekly magazine for children, Majid, was launched in February 1979 and has grown to be one of the highest circulated publications in the Middle East. With some of the regionâ€™s leading cartoonists providing pages of fun, the magazine also encourages interactivity with its young readers and publishes contributions from its young fans.