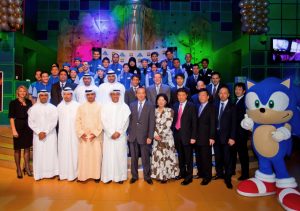 SEGA Republic, the Middle East’s first and largest of its kind indoor theme park, managed by Emaar Retail at The Dubai Mall, is setting new benchmarks in indoor entertainment with a never-before array of amusement games and thrilling rides.

Mr Alabbar said: “Emaar works with strategic partners who have proven competencies in driving forward our projects. SEGA Corporation is the undisputed leader in indoor theme parks, and brings in unprecedented innovation and design excellence to SEGA Republic. This is the first of its kind project in the region and is in line with our development credo of bringing in world-first and world-class experiences.â€

Mr Satomi said: “SEGA Corporation has pioneered a new dimension in indoor entertainment, which is perfectly embodied in SEGA Republic. In every aspect, this indoor park at The Dubai Mall is trend-setting â€“ from the ambience, dÃ©cor, service and variety of games and rides offered.”

Mr Amiri added: “The Middle East region has a strong youthful population, and offering them differential experiences is crucial for the success of malls and shopping destinations. SEGA Republic is a spectacular value-addition to The Dubai Mall and has attracted several thousand visitors over the past five months â€“ both young and old. The entertainment showcase at SEGA Republic is unparalleled, making it the most-preferred destination for game and ride enthusiasts.”