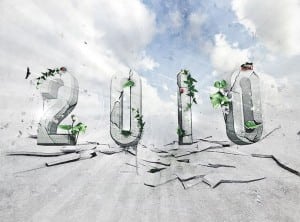 “A New Decade dawns today. While it is difficult to predict what course it would take, let’s all accept that there will be as many surprises – some nasty, others pleasant as in the one that just closed”, said Khaleej Times.
The good part is that there are lasting lessons to be learnt from the past years to ensure that those coming up turn out to be better. It is, therefore, no time to reflect on what went wrong, but on what could have been done better; said the editorial.

Meanwhile, Gulf News looked back at the gone year and said: “It is hard to pay tribute to 2009. It was a year of sorrow and disasters. It started with the internationally-banned phosphorus bombs raining on the defenceless people of Gaza and ended with several terror attacks that claimed many lives in the Middle East and beyond”.

Looking back at 2009, Gulf Today said: “The past year was quite unfair on the world, throwing it into an economic turmoil….The Financial crisis was apart from the terror attacks, violence and natural calamities. The world was virtually walking on the edge”.

Looking broadly at the past decade Khaleej Times lamented:.
“It was a bad decade. It was a dishonest decade. It was a forgettable decade. It was indeed, in many ways, a lost decade. It was a bad time to live. The Time magazine has dubbed the past 10 years as “the decade from hell” and while it is not very difficult to breathe a long sigh of relief, it has to be appreciated that a lot of us could have done better to make it different”.
The paper urged all to learn the hard lessons from the past and hoped that there could well be many other reasons to cheer as our lives change.

Gulf News Said: “The failure of the 2009 United Nations Climate Change Conference (COP15) in Copenhagen is not expected to be reversed in Mexico’s COP16 in 2010. Meanwhile, the Middle East peace process seems to have fallen to the bottom of the list of priorities of those concerned. Israeli colonies continue to be built and Gaza is suffocating….Nevertheless, we remain forever hopeful that 2010 will be a better year”.
Looking ahead Gulf Today said: “The world is looking forward to the new year with the high hope that the year 2010 will be at least better than the past, that there will be no war, no terrorist attacks, less poverty, more jobs and a peaceful co-existence”.

The National wrote: “The new decade indeed begins in gloom. There is no positive global agenda on the horizon, and fresh goodwill from the US has done little to reverse this downward momentum. Discussions of revamping world governance has faded, campaigns against poverty and hunger have been overshadowed by more immediate economic concerns, the global response to pandemics remain shaky and the threat of nuclear proliferation high”.
The paper emphasised the role of leadership to save the world and said: ” This is a moment for leaders to do their job: could they please step up and lead?”.