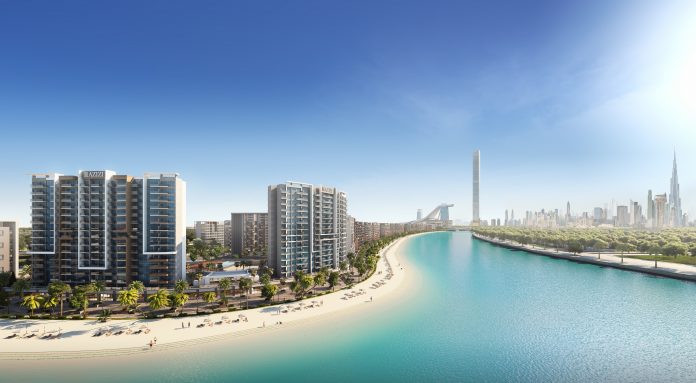 Azizi Developments, Dubai’s leading private developer, has just announced the addition of a gigantic crystal lagoon, akin to a massive swimming pool that is over 2.7 km in length covering an area of more than 130,026 sq. m, that will stretch across the entirety of its Riviera development in MBR City.

With stunning blue flooring, filled with more than 51.5m gallons of crystal clear, desalinated and clean water, and easily accessible via its lagoon walk, which will also feature a vast variety of artisan eateries and boutiques, Azizi’s lagoon will be a bustling space where residents can enjoy strolls along the beach-like shores, sunbathe and cool off.

After long talks with Nakheel, the master developer of the area, Azizi Developments has succeeded in getting approvals for the lagoon to be added to its flagship 71-building, 16,000-

residence waterfront community project in the highly sought-after MBR City to the amazement of its investors and end-users.

Mr Farhad Azizi, CEO of Azizi Developments, made the announcement: “It is rare that we get to add so much value, at absolutely no additional charge to our valued customers, in the form of such a colossal surprise. We are ecstatic to announce the addition of our very own crystal lagoon in the heart of MBR City, as part of our Riviera community. It took a lot of planning, with many of our dear stakeholders having been involved in making this ambitious plan a reality, but we are happy to now be able to reveal that this marvellous body of water, which is sure to make ROIs on Riviera’s properties surge, will be built within the coming year. We are overcome with joy to thereby turn Riviera into a more aesthetically pleasing, unique and recreational destination – one that truly adds to the lifestyles of those residing there.”

The previously planned canal, which would have had murkier sea water that wouldn’t have been fit to swim in, will now be replaced with a lagoon that residents can make much better use of, and that makes for much more stunning views from the community’s homes. Those who purchase retail units on the lagoon’s promenade will also be delighted by this surprise-announcement, with the lagoon attracting more footfall to the area and elevating its prestige.

Riviera is Azizi’s renowned waterfront lifestyle community project located in the heart of MBR City, which, upon its completion, will comprise more than 16,000 homes overlooking not only the new lagoon walk, but also an extensive retail boulevard, as well as Les Jardins — a lush-green social space.  With its strategic location near the upcoming Meydan One Mall and the Meydan Racecourse — home of the Dubai World Cup — as well as Dubai’s major business, leisure and retail hubs, Riviera is one of Azizi Developments’ most sought-after projects. Designed to introduce the French-Mediterranean lifestyle to Dubai, which is not merely about architectural art, but also about a certain ‘joie de vivre’ — a celebration of life and exultation of spirit — Riviera represents a new landmark destination that will add unique value to the UAE’s real estate landscape.