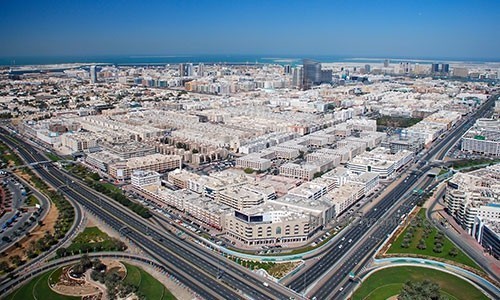 Over the past years, Al Quoz has successfully transformed from an industrial area to the beating heart of the creative scene in Dubai, contributing to enriching the cultural scene in the emirate with creativity and innovation. It achieved this by embracing modern art galleries and film, photography and music studios as well as the best cafes, among others, forming its own unique identity that blends the modernity of the city with its heritage.

Al Quoz is now an oasis of culture and creativity as well as a magnet for tourists and investors alike, thanks to the visions of the innovative entrepreneurs who foresaw the future and paved the path to realising it with their pioneering ideas to achieve their dreams and reflect the present and future of Al Quoz.

The Courtyard in Al Quoz, designed by the architect Dariush Zandi and inaugurated in 1998, is a unique landmark in the region, embodying the splendour of Arab architecture. In a short period of time, this project became home to a group of the most prominent galleries and companies associated with art in Dubai, such as the Courtyard Gallery and Total Arts Gallery, as well as high-end art shops, photography studios, and artistic design centres.

When recollecting the early days of The Courtyard, Zandi, owner of Total Arts Gallery, said: “When we inaugurated the building in March 1998, our goal was to transform it into an oasis of art and culture. We fulfilled our dream and were able to not only attract people working in this field but also introduce Dubai’s residents to distinct forms of creativity. We established something different from what was existent in the industrial zone, with a clear mission to progress upon the idea of creating a society in which all aspects of art and creativity could flourish and thrive in the neighbourhood.”

Regarding the secret behind the success of the project, Zandi said: “I believe that emphasising my goal, ambition, and respect for the creative community members, who share these aspirations, helped establish the neighbourhood as it is today. Our ambitions have expanded and flourished in tandem with the growth of the city, and, in one way or another, we became fundamental elements of the creative direction of the arts in the emirate, while also spread awareness among the public.”

The Creative Zone: the fruit of tireless efforts

Zandi stressed that the continuous growth and prosperity of creative businesses in Al Quoz, and the continuous development that entrepreneurs there sought — whose work spanned various areas of creativity, including photography, visual arts, installations, music, theatre and others — resulted in the development of Al Quoz Creative Zone. He added: “I project that over the next five years, we will witness rapid growth comparable to the growth that the area had witnessed over the past 25 years. I believe that we will see a creative economy that is richer and more integrated than what we have seen in Dubai so far, thanks to the Creative Zone that will elevate the creative industry to more advanced, innovative and prosperous levels. Investing and establishing a presence in Al Quoz today presents a host of advantages as it has become a solid destination for creative projects.”

Zandi highlighted that the creative economy strategy, launched recently by His Highness Sheikh Mohammed bin Rashid Al Maktoum, Vice-President and Prime Minister of the UAE and Ruler of Dubai, will reflect its benefits on everyone, adding: “The fruits of a creative economy strategy will not be harvested by me alone, but by all stakeholders in the creative community, and even by stakeholders in other fields of work in the region. Prosperity will prevail for everyone, and this will reflect on the city as a whole, and even on the level of the region as a whole.”

Zandi emphasised that the involvement of government agencies in this project provides an integrated system that would fulfil the hopes and aspirations that the members of the creative community have always sought in Al Quoz; he also added that Expo 2020 will help enhance Al Quoz’s position as a creative zone. The area has become a destination for many Expo 2020 stakeholders to hold workshops and utilise its facilities in preparations for the activities they will be participating with at the exhibition. Zandi said: “I think we will have more visitors and users before, during, and after Expo 2020. I look forward to a successful programme for Al Quoz Creative Zone, and I hope that we can all contribute to the success of Expo 2020 as well.”

At Alserkal Avenue in Al Quoz, there are other success stories worth highlighting, including Sima Dance Company, which was founded by the renowned director and choreographer, Alaa Krimed. It is an experience that confirms the creative energy present at Alserkal Avenue and in Dubai in general.

Alaa Krimed initially founded Sima Dance Company in 2003 in the Syrian capital of Damascus. having noticed a void in the Arab contemporary dance landscape. Krimed took the first steps towards filling that gap to expose the Middle Eastern audience to the art of contemporary dance, and in 2012, the company moved to Beirut, founding a dance studio that focused on promoting Arab contemporary dance in Lebanon. In 2015, the company relocated to Dubai in 2017 and opened its own art space under the name Sima Performing Arts at Alserkal Avenue, leading to the formation of successful cooperation initiatives between Sima Dance Company and the most prominent cultural institutions in the UAE. Since 2016, several artistic performances have been presented at the Quoz Arts Fest in Alserkal Avenue, and in 2017, the company was commissioned to present a performance for ‘Art Dubai’ exhibition as well as for many other events across the country.

Regarding his vision of the company’s future over the next five years, Krimed said: “I see Sima Performing Arts to be the go-to space for everything relating to performing arts, representing the UAE in this Art Form nationally and internationally. As for Al Quoz, I believe it will be the destination and main hub for arts and culture in the UAE.”

Advantages and prospects for improvement

Krimed affirmed that Al Quoz possesses the necessary elements to serve Sima Dance Company, stressing that he aspires to establish a primary theatre with affordable ticket fees that all members of the community could attend, saying: “Al Quoz is large enough to accommodate a big theatre that houses all forms of art. This main theatre will also be the space for all forms of live performances and communicating with audiences.”

Krimed added: “There are many advantages for those who establish their business in Al Quoz. Alserkal Avenue, for example, is the art hub in Dubai, attracting art lovers from all over the UAE, and Al Quoz offers a multitude of big spaces. The only disadvantage for the area is its roots as an industrial area, which means its infrastructure would need to be updated. I believe developing Al Quoz should be the first task to allow it to grow and attract people’s attention. Over time, the same can be applied to other areas.”

On the effect the Dubai Creative Economy Strategy has on the company’s business, Krimed stressed that any strategy launched by the government to support the arts will definitely be beneficial, not only for Sima Performing Arts but for all creative works and the art scene in the city.

The art schools in Al Quoz are varied. From visual and performing arts, we move to the luxury arts and luxury brands that shined in The Luxury Hive Consultancy, which was established in the area in 2019. One of the company’s core services is facilitating collaboration between luxury brands and GCC cultural and heritage organisations

On choosing Al Quoz as the company’s headquarters, Maya Darian, Managing Director of The Luxury Hive, explains: “Far from being a purely industrial area, Al Quoz is home to a thriving community of innovative creative industries, which makes it a natural choice for our business. For example, we are situated in proximity to Alserkal Avenue — Dubai’s most influential creative enclave — and we are in the centre of Dubai, close to major business and creative hubs, such as Dubai Media City, Dubai Design District, DIFC, etc. Not only that, most of our suppliers for our event curations are based nearby.”

Looking to the future over the next five years, Darian said: “The strategy to transform Dubai into the world’s creative economic capital shed light on what is in store for our industries going forward, and there are great things on the horizon for Al Quoz in this respect. Entrepreneurs in this sector feel that the government has our backs — that we are a priority. Given this reassurance, and the stimulating ecosystem that is developing around us and that we are a part of, I am very optimistic about the future of my business and the evolution of our neighbourhood, which is providing the ideal environment for us to transform our creative aspirations into a sustainable economic resource.”

Darian added: “The Dubai Creative Economy Strategy will open the door to a large and unexplored pool of talent from around the world, providing tremendous opportunities for collaboration with local entities in the UAE. All these initiatives in the area will provide significant added value and support to the community of entrepreneurs and talented individuals, who will increasingly converge in Al Quoz to exchange ideas and express their creativity. This will also introduce a new level of competition that will serve as a powerful motivator for the development of innovative creative industries in Dubai.”

On the prospects for expanding Al Quoz Creative Zone to other areas of Dubai, Darian believes that ideally, Al Quoz should remain the sole creative zone in the emirate for at least the next five years, explaining that it will allow sufficient time for the infrastructure to develop and the extent to which the creative-related services and flexible legal framework in place would be evaluated to establish if it would incentivise artists, designers, and emerging creative entrepreneurs to live and work in the zone.

Expo 2020 is an ideal opportunity

Darian emphasised that Expo 2020 will be an ideal opportunity for cultural exchange and knowledge sharing; it will also provide new interactions and collaborations. He added: “If the zone is properly introduced and tactically promoted via this global platform, it will surely attract creative individuals and companies from all over the world while also support the the Dubai Creative Economy Strategy.”

There is no doubt that Al Quoz, like many other industrial areas in cities around the world, has played an important role in the cultural and social development of the city and its society. It has been the driving force of the artistic and cultural scene in Dubai since 2000, and it has become a hub where artists and craftsmen showcase and develop their talents and creativity. Through the development of Al Quoz Creative Zone, Dubai Culture seeks to nurture and develop the area to make it an integrated community for creative entrepreneurs and a platform for them as they aspire towards a brighter and more creative tomorrow.