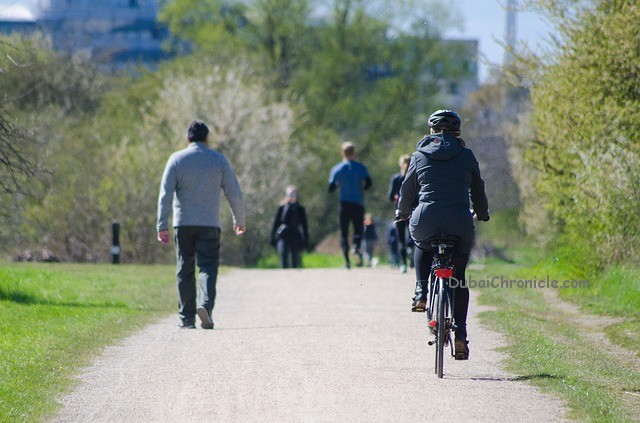 According to a new study led by the Barcelona Institute for Global Health (ISGlobal) –a centre supported by the “la Caixa” Foundation–, people who commute through natural environments report better mental health. This is the main conclusion of a research based on questionnaires answered by nearly 3,600 participants from four European cities and published in Environment International.

The study was conducted within the Positive Health Effects of the Natural Outdoor Environment in Typical Populations in Different Regions in Europe project (PHENOTYPE). The 3,599 participants from Barcelona (Spain), Doetinchem (the Netherlands), Kaunas (Lithuania) and Stoke-on-Trent (UK) answered a questionnaire about their commuting habits and their mental health. The statistical analysis showed that respondents commuting through natural environments on a daily basis had on average a 2.74 point higher mental health score compared to those who commuted through natural environments less frequently. This association was even stronger among people who reported active commuting (i.e. walking or cycling). In this case, natural environments were defined as all public and private outdoor spaces that contain ‘green’ and/or ‘blue’ natural elements such as street trees, forests, city parks and natural parks/reserves, and also included all types of waterbodies.

“From previous experimental studies we knew that physical activity in natural environments can reduce stress, improve mood and mental restoration when compared to the equivalent activity in urban environments. Although this study is the first of its kind to our knowledge and, therefore, more research will be needed, our data show that commuting through these natural spaces alone may also have a positive effect on mental health“, says Wilma Zijlema, ISGlobal researcher and first author of the study.

“Mental health and physical inactivity are two of the main public health problems associated with the life in urban environments. Urban design could be a powerful tool to confront these challenges and create healthier cities. One way of doing so would be investing in natural commuting routes for cycling and walking”, states Mark Nieuwenhuijsen, coordinator of the ISGlobal Initiative of Urban Planning, Environment and Health and last author of the study.