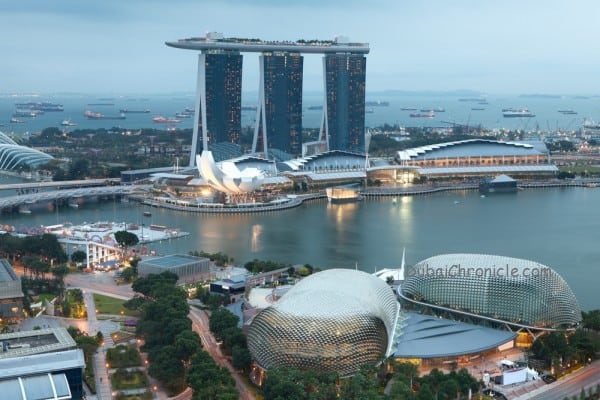 Singapore has again been rated by expats as the best country in the world to live and work, in the new HSBC Expat Explorer survey. Singapore saw off competition from Norway, which rose four places to come second. Culturally very different yet both highly-regarded, Singapore and Norway offer expats a stable economic and political environment while giving them a fulfilling experience and an improved family life.

Now in its tenth year, the HSBC Expat Explorer survey is the world’s largest and longest running study of expat life, asking more than 27,500 expats about their experience abroad. As well as unveiling the best places in the world to live as an expat, the survey also found that life abroad typically increases expats’ income by 25%, with the average expat earning just under USD100,000 a year. Far from compromising their wellbeing, expats seem to find the right balance. Four in ten (41%) expats adopt a more positive outlook on life after moving abroad, with 44% becoming more physically active.

The Expat Explorer overall league table ranks each country or territory using a score that summarises expats’ views on economics, experience and family life aspects in their host country.

Confidence in the political stability (83%) and local economy (73%), a great quality of life (64% say it is better than at home) and a positive experience for families are among the reasons why Singapore has topped the Expat Explorer league table again.

Not only is Singapore a land of economic opportunity, it is also a top destination to raise a family. Four in five expats (82%) feel safer there than at home and 72% of expat parents rate the quality of education and the health and well-being of their children better than in their home country. This compares with 49%, 44% and 50% globally.

But expat life in Singapore can come at a price. Expats are less likely to see an improvement in their work/life balance than those in other destinations (47% compared to 53% globally). More than four in five expat parents (84%) find that the cost of raising children in Singapore is more expensive than at home.

Norway, meanwhile, is up four places in the league table and narrowly misses out on the top spot. The majority (90%) of expats in Norway say that their work/life balance has improved and 78% that the job security is better than at home (compared with 53% and 41% globally). Furthermore, 82% of expat parents say that their children’s overall quality of life is better than at home, compared with 59% globally. These much appreciated upsides are typical of the Nordic model, characterised by a flexible yet secure employment market as well as free education and universal healthcare.

In addition to the overall country league table, the Expat Explorer report ranks countries in three sub league tables – Economics looks at the impact moving abroad has on expats’ wealth, Experience focuses on health and quality of life, and Family looks at the best places in the world to bring up a child.

European countries head this year’s Economics league table, with Switzerland coming top for the third year in a row. The strong Swiss economy and stable political environment are appreciated by expats. The vast majority (89%) of expats feel confident about the economy, while 78% say their earning prospects are better than at home.

Switzerland is not the only Economics hot spot, however. Germany performs well for career development, with 62% of expats in the country saying it is a good place to progress their career, compared with 54% globally.

Expat Experience: New Zealand and Spain praised for the quality of life

New Zealand comes top in the Experience league table. Almost three in five expats (58%) moved to the ‘land of the long white cloud’ to improve their quality of life, compared to just a third (34%) of expats globally. Almost three-quarters (72%) are integrating well with the local people and culture.

New Zealand is followed by Spain (2nd) and Portugal (3rd), with Singapore and Australia completing the top 5. Spain and Portugal are lauded by expats for their healthy lifestyles. Almost three-fifths of expats in Spain (58%) and in Portugal (57%) say their physical health is better as a result of the move, compared to a global average of 36%. Mexico has moved up seven places from 20th to 13th, with 81% of expats there enjoying immersing themselves in the local culture, compared with 62% globally.

Expat Family: The Netherlands is the new hotspot

The Netherlands has overtaken Sweden as the best place to raise a family, rising nine places in one year. More than three-quarters (76%) of expat parents in the Netherlands say the health and wellbeing of their children is better than it was at home. Expat parents also praise the quality of education and childcare, with 72% and 65% respectively saying it is better than at home.

Last year’s winner, Sweden, ranks as the second best country to raise a family. Nearly three-quarters (72%) of expat parents rate the quality of childcare as better than at home and 71% said the process of arranging a school for their children was straightforward.

Other country moves in the Expat Explorer league table:

#10 UAE: Back for good
A renowned destination for expats, the UAE is back in the top 10 and is living up to its promise. More than half (56 %) say they moved there to improve their earnings, compared with 22% of expats globally. The benefits of expat life in the UAE are not limited to finances. More than half (55 %) say their work/life balance is better than at home and more than three in five (62 %) say their overall quality of life has improved. The same goes for families, with 66% of expat parents saying their children’s quality of life is better since the move.

#35 UK: Mixed sentiments with positive experiences
Down 13 places to 35th, the UK’s ranking has been affected by a 20 percentage point drop in confidence in the economy (43%) and a 22 percentage point fall in confidence in the country’s political stability (31%). However, expats still believe the UK offers a positive experience. Almost seven in ten (68%) say the UK is a good place for expats who want to progress their career compared with a global average of 54%, and 56% say that earning prospects are better than at home compared with 50% globally. Almost seven in ten expats are integrating well with the British people (69%) and enjoy immersing themselves in the local culture (68%).