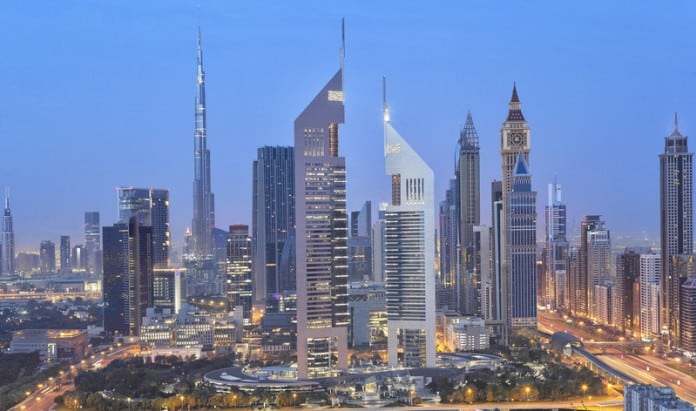 On July 7, 2017, the Executive Board of the International Monetary Fund (IMF) concluded its latest assessment of United Arab Emirates economic outlook.

Economic activity is expected to strengthen gradually in the coming years with firming oil prices and other global indicators, and an easing pace of fiscal consolidation. Non oil growth is projected to rise to 3.3 percent in 2017 from 2.7 percent in 2016, reflecting increased domestic public investment and a pickup in global trade. Over the medium term, non oil growth is expected to remain above 3 percent, supported by accelerating investment in the run up to the Expo 2020 Dubai. The planned VAT introduction in 2018 is not expected to have a significant adverse impact on growth.

The economy is weathering the post-2014 oil shock well. With lower oil revenues, fiscal and external positions weakened, financial conditions tightened, and growth slowed. The weaker economy elevated risks of bank loan delinquency, requiring higher provisioning. Yet the UAE’s financial buffers, safe-haven status, sound banks, and diversified and business-friendly economy are helping it cope with the shock. Growth is projected to recover over the next few years, as the pace of the necessary fiscal consolidation eases, global trade regains momentum, and investment, including for Expo 2020 Dubai, accelerates. This outlook is subject to downside risks, stemming mainly from a further sustained decline in oil prices, tighter financial conditions, a rise in protectionism and an intensification of regional conflicts.

The key policy goal is to foster economic adjustment to the new oil market realities. Although the fiscal position remains sustainable, an improvement in the budget balance is needed to ensure that an equitable share of the oil income is saved for future generations. Ample fiscal space allows deficits to decline gradually while mitigating the adverse impact on the economy and the financial sector. Following the rapid pace of fiscal adjustment in 2015‒16, the projected pause in consolidation this year is appropriate as it would reduce spare capacity. It needs to be followed by a gradual but steady tightening over the medium term as growth strengthens. The long-standing peg to the U.S. dollar remains appropriate. A moderate current account gap is expected to close over time as fiscal savings rise to the level consistent with intergenerational equity. The authorities’ efforts to make the economy more productive are key to alleviating the impact of the oil shock on medium-term growth prospects.

To foster the adjustment, especially given downside risks, the momentum in fiscal reforms needs to be sustained and coordinated with structural reforms. Complementing recent significant subsidy reforms, a timely introduction of the VAT and excises would be another major achievement, to diversify revenues away from oil. In tandem, continual efforts to contain growth of public spending and improve its efficiency are needed to generate the necessary fiscal savings while continuing to use public investment to diversify the economy and expand its productive capacity, consistent with the Vision 2021 National Agenda. Importantly, improving the efficiency of public education spending, in conjunction with education reforms, and gradually raising healthcare spending would help nurture talent and foster a more productive and inclusive economy. Controlling the size and wages of the civil service while promoting entrepreneurship and female participation would improve private sector employment, including for women.

To ensure credibility, fiscal adjustment should be accompanied by strengthening the medium-term policy framework and improving transparency. Adopting and publishing multi-year plans and integrating them with the annual budget process would clarify the direction for fiscal policy. Fiscal anchors and targets can be strengthened further to anchor fiscal sustainability and intergenerational equity. These efforts need to be supported by enhanced coordination between governments and GREs regarding their investment and borrowing plans. Strengthened control of contingent liabilities arising from GRE and PPP investment could prevent a buildup of fiscal risks. Close coordination between governments, GREs, SWFs, and the CBU is necessary to facilitate cash management and liquidity forecasting. Looking ahead, stepped up efforts to develop the domestic debt market, together with more active liquidity management by the CBU, would expand financing options while promoting healthy credit conditions.

Ongoing initiatives to upgrade the supervisory and regulatory framework for the financial sector are welcome and need to continue. The CBU’s introducing and implementing the Basel III capital and liquidity standards, risk management regulations, corporate governance standards, and new financial products and services are key to strengthen financial resilience while addressing market development needs. Close monitoring of financial vulnerabilities, including currency mismatches, foreign exchange and concentration risk, and prompt undertaking of the necessary supervisory actions are to essential, especially since the macro-financial impact of the oil shock is still unfolding amid downside risks. The authorities need to sustain welcome progress in strengthening the AML/CFT regime, especially in light of risks related to money transfer operators, which facilitate remittance flows from the large expatriate community in the UAE to other countries.

Focused, multi-pronged initiatives to raise productivity and diversify the economy would improve medium-term economic prospects. The authorities have set clear goals for fostering diversified, knowledge-based growth. Achieving them requires focused policy measures that could encourage synergies in investment between emirates, promote foreign investment outside free zones, and foster competition, including for GREs. Following the adoption of the new bankruptcy law, its effective implementation, along with steps to ease access of SMEs to finance, could boost private sector growth. Building on recent energy subsidy reforms, ongoing initiatives to increase energy efficiency are key for raising productivity.

Amid ongoing economic adjustment, continued improvements in statistics are critical for enhancing policy analysis and decision-making. Multifarious efforts by local and federal statistical agencies to improve the availability, quality, and timeliness of economic statistics are welcome. Improved coordination among these agencies as well as continued technical assistance would be needed to address the remaining wide-ranging gaps. The Fund’s e‑GDDS standard could provide a useful roadmap for such efforts. Compiling quarterly GDP and IIP for the government are immediate priorities in this regard.