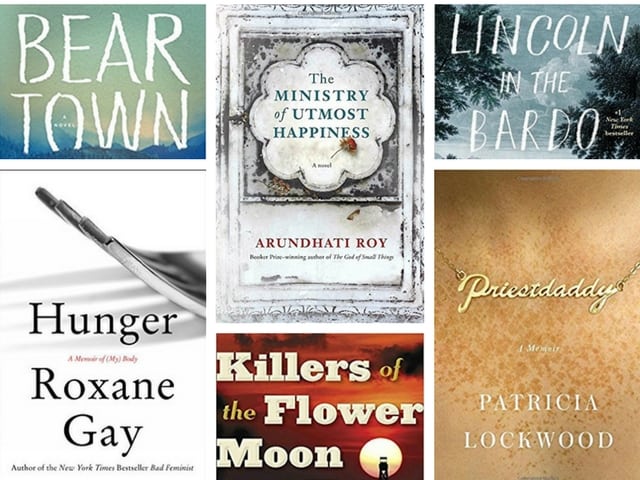 A selection of the Best Books of 2017 so far was revealed today by Amazon. Arundhati Roy’s novel The Ministry of Utmost Happiness is the top pick overall. The complete lineup is listed here.

Every year Amazon books editors select the most popular books. The list with the Best Books of 2017 features the Top 20 books released between January and June 2017. The editorial team selects the best titles for every reader’s summer—from futuristic novels and small-town stories to page-turning memoirs.

The Amazon books editors’ picks for the first 10 of the Top 20 Best Books of the year so far are:

The Ministry of Utmost Happiness: A Novel by Arundhati Roy: An intricate and graceful story of lives touched by magic, broken by tragedy, and mended with love. It’s an exceptional work of storytelling and well worth the 20 year wait since her beloved debut, The God of Small Things.

Killers of the Flower Moon: The Osage Murders and the Birth of the FBI by David Grann: Smart, taut and gripping, Grann’s true-if-largely-unknown tale of big oil and serial murder on the Osage Indian Reservation in the 1920s is sobering: at once unsurprising and unbelievable, full of the arrogance and inhumanity that our society has yet to overcome.

Beartown: A Novel by Fredrik Backman: The author of A Man Called Ove sidesteps the predictable as he forges a new path of soul-searching and truth-telling in his gripping new novel about a small, hockey-mad town whose hopes and loyalties are torn apart by a crime no one wants to believe happened.

Exit West: A Novel by Mohsin Hamid: In this futuristic novel, young lovers flee a war-torn Middle Eastern country to seek safety in the West, where cities like London have become embattled refugee settlements. Hamid (author of The Reluctant Fundamentalist) has said that in some sense we are all refugees, and it’s easy to sympathize with his protagonists, who find their romance tested by their travails in exile.

Priestdaddy: A Memoir by Patricia Lockwood: When Patricia Lockwood temporarily moves back in with her parents—her father, a Catholic priest who loves electric guitars; her mother, focused on disasters and Satan worshippers—she returns, as well, to the memories of her upbringing. Poetically precise language and darkly hilarious observations spark zingers that will make you rethink your own childhood indoctrinations.

You Don’t Have to Say You Love Me: A Memoir by Sherman Alexie: In this family memoir set on the Spokane Indian Reservation, Alexie (author of The Lone Ranger and Tonto Fistfight in Heaven) connects, with humor and poignancy, the troubled life of his whip-smart and sometimes-cruel mother to the history of oppression and violence suffered by the larger American Indian community.

Lincoln in the Bardo: A Novel by George Saunders: Set in 1862, at a ghost-filled cemetery where President Lincoln’s beloved son Willie has been laid to rest, this first novel by acclaimed short-story-writer and essayist George Saunders will upend your expectations and leave you hooting with laughter when you aren’t wiping away your tears.

The Impossible Fortress: A Novel by Jason Rekulak: A coming-of-age story tucked inside a love letter to the strange and wonderful 1980s. It’s one of those rare and special books: once you’ve finished it, you’ll want all your friends to read it immediately.

Hunger: A Memoir of (My) Body by Roxane Gay: In this brutally honest and brave memoir, the bestselling author of Bad Feminist recounts how a childhood sexual assault led her to purposely gain weight in order to be unseen and therefore feel safe; it’s a story that will inspire you to be more considerate of the bodies of others and more accepting of your own.

Homo Deus: A Brief History of Tomorrow by Yuval Noah Harari: With Homo Deus, Yuval Noah Harari follows up his bestselling Sapiens—which looked back at the last 70,000 years of human evolution and history—with a look forward. In short, where do we go from here?

To see the complete list of the Best Books of the Year So Far, and to purchase in Kindle or Print, visit: www.amazon.com/bestbookssofar.