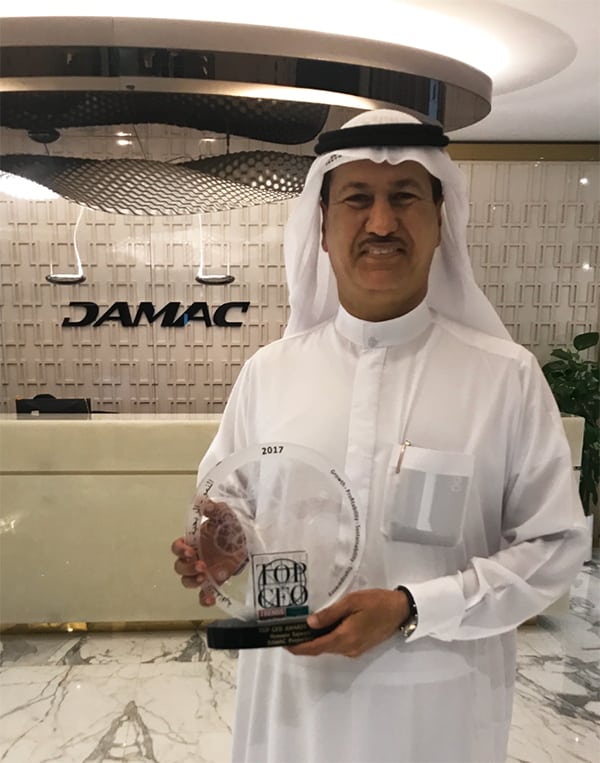 Hussain Sajwani, Founder, Chairman and CEO of DAMAC Properties, a leading luxury real estate developer in the region, took first place amongst real estate CEOs and ranked number 11 on the list of 100 regional CEOs in the Top CEO Awards 2017, held in Jeddah recently.

Organised by TRENDS magazine in conjunction with INSEAD business school, the Top CEO Awards 2017 paid tribute to 100 business leaders whose efforts toward the success of their organisations are instrumental in the continued growth of the GCC and have excelled in the field of leadership.

Hussain Sajwani commented: “It is indeed an honour to receive this award, which I whole-heartedly dedicate to my team who worked long and hard to make DAMAC Properties what it is today. This award reaffirms our success and achievements as a company, and celebrates our contribution to Dubai’s overall success story and the wider GCC.”

The red carpet awards ceremony, which has recently taken place at King Abdullah Economic City – Saudi Arabia, celebrated achievements of Top CEOs in the GCC region. The Top CEO Awards targets the region’s most affluent people, CEOs, CMOs, Presidents and VPs of listed companies on the GCC bourses and is based on companies’ performances over the past fiscal year.

Julien Hawari, Co-CEO at Mediaquest, the media and events company behind the initiative, said: “Top CEO Awards distinguishes itself from other schemes by stipulating that only CEOs of listed companies are eligible for entry. The awards are based on the financials of these companies, with the entire evaluation process being fully transparent and audited.

“TRENDS works in partnership with INSEAD to ensure that the program formula is the most accurate it can be and collaborates with Hawkamah to include corporate governance and disclosure criteria as integral components of the ranking. The entire work has a final review by Deloitte, who provide an independent, authoritative stamp of approval. The overall result is that Top CEO is the most reliable barometer of business leadership performance for the region,” Julien added.

The Top CEO Awards 2017 evening was attended by close to 400 senior business figures from a wide cross-section of industries, keen to salute and celebrate the achievements of the region’s leading executives.