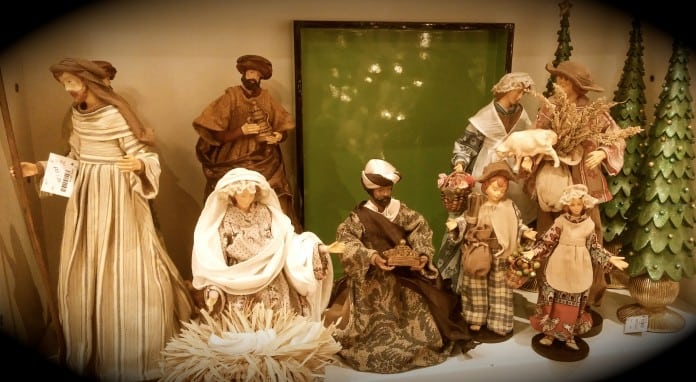 This year, Pope Francis warned that the holiday season has been taken hostage by the “lights of commerce.”

During his annual Christmas Eve mass at St. Peter’s Basilica in Rome, Speaking to an audience in Rome of thousands of people and a worldwide TV audience of millions, the Pope said, “If we want to celebrate Christmas authentically, we need to contemplate this sign — the fragile simplicity of a small newborn, the meekness of where he lies, the tender affection of the swaddling clothes. God is there.”

‘Let us allow ourselves to be challenged by the children who are not allowed to be born, by those who cry because no one satiates their hunger, by those who do have not toys in their hands, but rather weapons.’

“Jesus was born rejected by some and regarded by many others with indifference,” he added in his Christmas Eve message. “Today also the same indifference can exist, when Christmas becomes a feast where the protagonists are ourselves, rather than Jesus. When the lights of commerce cast the light of God into the shadows; when we are concerned for gifts, but cold toward those who are marginalized.”

In remarks that were not included in the original transcript, the pope, who is head of the Roman Catholic Church with an estimate 1.2 billion members, told the audience, “This worldliness has taken Christmas hostage,” adding that we need to be “freed” from it.

The pope addressed children who are living in poverty and war, and also appeared to reference the Syrian refugee crisis that has created political upheaval in Europe.

“Let us also allow ourselves to be challenged by the children of today’s world, who are not lying in a cot caressed with the affection of a mother and father,” he added, “but rather suffer the squalid mangers that devour dignity — hiding underground to escape bombardment, on the pavements of a large city, at the bottom of a boat over-laden with immigrants.”

He added, “Let us allow ourselves to be challenged by the children who are not allowed to be born, by those who cry because no one satiates their hunger, by those who do have not toys in their hands, but rather weapons.”