The 500,000 square metres of land in Dubai Investments Park (DIP) are much more than an ordinary building site in the desert.

The two plots are developed as two enormous warehouses. They are about become the first industrial land in the UAE outside a free zone to be available for foreign investment. 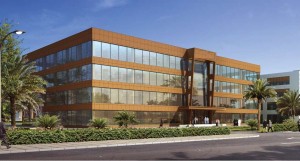 Mr Mesmar also added that it was very successful to convert a piece of desert into a city where at the current time almost 75,000 people are living. The number of people visiting every single morning to go work or to the schools amounts to 15,000.

Dip gives foreigners the opportunity to get their hands on industrial property at the park, which on current management estimates could result in returns between 12 and 14 per cent a year on an 85-year lease. The management of Dip also said that there had been discussions with about 20 parties interested in the plots.

According to local estate agents, the land will bring between Dh300 (US$81.67) and Dh600 per sq metre, depending on the size of the plot and payment terms.

Mr Mesmar said that the park is not a free zone. This means that if someone decides to go there to develop and own a facility, they must have a local partner or sponsor. Nevertheless, under the new regulations, foreigners can own a warehouse and then lease it out to a third party.

Even though foreign investors may only be able to purchase land at the two final phases of the park, the management said office and industrial buildings across the park were also now eligible to be sold on long leaseholds to overseas investors. Mr Mesmar said that it includes even existing facilities.

The company has received a lot of requests from its existing partners. It expects private families, investment banks, and even individuals who are living there to be interested in the park. Mesmar added that there is not much availability for logistic facilities. That is why the company predicts good demand in the future.

Dip and Cluttons, its property adviser, are putting together an expensive structure for the different properties available, such as offices, showrooms, staff accommodation, housing and warehousing. They hope to sell them off on long leases.

Dip is now 98.5 per cent leased and the park’s management said it was trying to take the idea elsewhere (to Saudi Arabia; Qatar; Bahrain).

Mr Mesmar commented that they are not building a small company or a small factory for Dh2 million or Dh3m, they are developing a whole city and it takes a huge investment.