Construction expected to begin in June 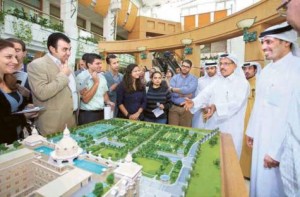 The Habtoor Leighton Group (HLG) has been contracted to build what will become the largest integrated  luxury hotel complex in the Middle East, equipped with two multi-storey towers, 1,600 rooms and a Las Vegas-style aqua theatre. The entertainment complex concept is similar to The Venetian in Macau, where Cirque du Soleil held  permanent performances during the last three and half years.

Once completed, the new hotel floor area will sprawl across a whopping 350,000 square metres.

It won the contract from the Al Habtoor Group, one of the Middle East’s leading construction firms headed by billionaire businessman Khalaf Al Habtoor.

The two companies have embarked on joint ventures in Dubai in the past, including construction of the Habtoor Grand and Metropolitan hotels.

Dubai’s oldest hotel, the Metropolitan Hotel, will be demolished to make way for the new Habtoor Palace development.

Construction is expected to begin in June, with completion scheduled for the second half of 2016.

HLG has constructed many of Dubai’s most well-known hotels, including the seven-star Burj Al Arab, the Jumeirah Beach Hotel and the Dubai Shangri-la Hotel.