Before it can expect other countries to help, the Eurozone must allocate more of its own money on a financial firewall to prevent the economic problems of some of its member states from contaminating the rest of the region, a high-powered group of leaders warned at the World Economic Forum Annual Meeting in Davos-Klosters, Switzerland.

“There are not going to be further contributions to the International Monetary Fund from other G20 countries, including Britain, unless we see the ‘colour of their money’,” said George Osborne, Chancellor of the Exchequer of the United Kingdom. “The Eurozone needs to provide a significant increase in available resources to the firewall.”

Eurozone leaders are trying to build a so-called firewall in the form of the European Financial Stability Facility (EFSF) and the European Stability Mechanism (ESM). Other countries, such as the United States, Japan and China, are being asked to help by contributing more to the International Monetary Fund (IMF), which will help buttress the firewall. Leaders of the 17-member Eurozone have pledged to enlarge the size of the EFSF, which currently has around €250 billion in unused funds, but have yet to agree on the amount.

“Europe must exert the utmost effort, otherwise I don’t think that developing countries like China will be so willing to contribute more money to the IMF,” said Motohisa Furukawa, Minister for National Policy, Economic and Fiscal Policy, Science and Technology Policy of Japan. He noted that Japan is providing major support to the EFSF by buying 16% of the bonds it has so far issued. 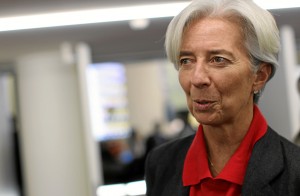 But IMF Managing Director Christine Lagarde warned that the Eurozone crisis is not the region’s problem alone. “It’s not just a Eurozone crisis, it’s a debt crisis that could have collateral effects, spillover effects, around the world,” she said. “What I have seen and what the IMF has seen in numbers and forecasts is that no country is immune and everybody has an interest in making sure that this crisis is resolved adequately.”

The IMF has lowered its forecast of global economic growth in 2012 to 3.3% and expects the Eurozone to slip into recession. But China’s GDP is still projected to expand by more than 8% and reasonable growth is forecast in other emerging markets – assuming Eurozone leaders succeed in restoring market confidence in the euro and the Eurozone economy by resolving Greece’s looming sovereign default.

By contributing to the IMF, the world will be making a “statement of confidence for the multilateral process”, Lagarde argued. If the new money is big enough, “it will not get used,” she added, because the financial markets and businesses would be reassured that the IMF will have the means to help distressed economies put their house in order. “The same applies to the Eurozone firewall, for the matter,” she added.

Donald Tsang, Chief Executive of Hong Kong Special Administrative Region, injected a reality check. “No matter how strong the firewall is, the market will look at the nature of the economies that this firewall is protecting,” he pointed out. If the countries being protected are insolvent, no firewall can protect them in the end.

With record participation of over 2,600 leaders from government, academia, business and civil society, the theme of this year’s Annual Meeting is The Great Transformation: Shaping New Models.