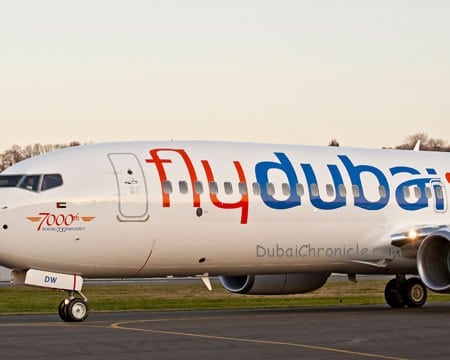 Today Boeing delivered the 7,000th 737 to come off the production line to Dubai-based flydubai. The airplane is flydubai’s 14th Next-Generation 737-800 with the new Boeing Sky Interior. The Boeing 737 is the best-selling commercial jetliner of all time with total orders exceeding 9,300 airplanes, including orders for the new 737 MAX.

“It is incredible to be delivering our 7,000th 737. We thank flydubai and all our customers who have made the 737 the world’s most popular jet airliner,” said Beverly Wyse, vice president and general manager of the 737 program. “This success is due to the years of expertise that thousands of employees continue to build into every Boeing 737 used in private, government and commercial service.”

In November 2010, flydubai had the distinction to be the first airline in the world to offer passengers an enhanced onboard experience with the brand new Boeing Sky Interior. Today’s delivery will be the 21st in flydubai’s fleet and the airline has an additional 30 737-800s on order.
“We are proud to be a part of this important milestone for the 737,” said Ghaith Al Ghaith, CEO, flydubai. “With its continuous innovations, the Next-Generation 737 brings the right combination of operational and environmental performance to address the requirements of our markets.” Ghaith adds, “The Next-Generation 737 is a major cornerstone to flydubai’s modern, fuel-efficient and economical portfolio of commercial jets.”

The 737 is the most produced large commercial jet airliner in history and continues to hit the record books as the program produces airplanes at record rates. The gap between each record delivery is shrinking. It took Boeing 4 years 8 months between the 4,000th and 5,000th, while the gap between the 5,000th and 6,000th delivery was 3 years and 2 months. The 7,000th delivery is just 2 years and 8 months after the 6,000th. With 737 production rates increasing incrementally to a record 42 airplanes a month in the first half of 2014 the gap will continue to close.

The 737 MAX is the new-engine variant of the world’s best-selling airplane and builds on the strengths of today’s Next-Generation 737. Powered by the new CFM International LEAP-1B engines, the 737 MAX reduces fuel burn and CO2 emissions by an additional 10-12 percent over today’s most fuel-efficient single-aisle airplane, the Next-Generation 737. It will have the lowest operating costs per seat in the single-aisle segment with a 7 percent advantage over tomorrow’s competition.

With more than 5,400 airplanes in service, the 737 represents more than a quarter of the total worldwide fleet of large commercial jets flying today. More than 358 airlines in 114 countries fly 737s.