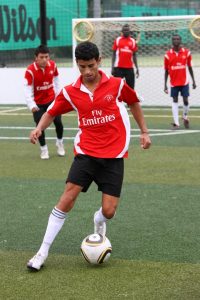 Football United, Australiaâ€™s team for the Football for Hope Festival in Johannesburg next month, announced that it has teamed up with Emirates, an Official Partner of 2010 FIFA World Cupâ„¢.

The Football for Hope Festival will run alongside the 2010 FIFA World Cupâ„¢ during June and July, and is more than just a competitive tournament, with the 32 teams selected for their contribution to highlighting the power of the game for social change.

The organisation representing Australia, Football United, is an initiative of the University of New South Wales, and uses football to support refugee and other disadvantaged youth in Sydney.

Maurice Flanagan, Executive Vice Chairman, Emirates Airline & Group, said: â€œWe are proud to be supporting Football United in their campaign for the Football for Hope Festival in Johannesburg.

â€œAs an Official Partner of FIFAâ€™s Football for Hope Festival, we are behind the tournamentâ€™s aims to bring about social change in disadvantaged communities through football, and believe the work of Football United is a great example of this in action in Australia.

â€œEmirates has a long-standing association with football globally, with headline sponsorships including Arsenal, AC Milan, and Paris Saint Germain among others, and we are pleased to add such a crucial community initiative such as Football United to this portfolio.â€

CEO of Football United, Anne Bunde-Birouste, said: â€œThrough the support of Emirates, Official Airline Partner of the FIFA World Cupâ„¢ and the Football for Hope Festival, our delegation will receive flight support to South Africa, as well as playing and travel forms and kit. 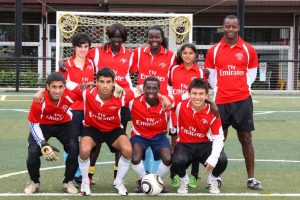 â€œThe support of Emirates has come at a crucial stage of our planning and will make the dreams come true for a group of youths that have had very little positive opportunities in their life.Â  This partnership is also allowing many of our players the opportunity to return to Africa for the first time after fleeing their war torn countries of origin and living in refugee camps for many years.â€

The team departs Australia on June 27th, onboard the Emirates A380 aircraft from Sydney, to arrive in time to Johannesburg for the tournament which commences 28th June.

The 32 competing mixed teams of youths aged 15-18 which Australiaâ€™s team will line up againstÂ  have been selected from aÂ  diverse range of countries including Kenya and Cambodia. The Football for Hope Festival, being organised by FIFA, streetfootballworld, the 2010 FIFA World Cup Organising Committee, and the City of Johannesburg, will be played in a specially constructed stadium in the Johannesburg township of Alexandra.