Not only are villa prices on Dubai’s iconic Palm Jumeirah closing in on a new record high, but the number of home sales is the highest in almost five years, according to analysis by global property consultancy Knight Frank.

Faisal Durrani, Partner – Head of Middle East Research, Knight Frank explained: “The boom in ultra-prime home sales across Dubai is nowhere better reflected than on the Palm Jumeirah, where average transacted prices, at over AED 2,100 psf, are at their highest level in over five years. What’s more, 19 of the 34 USD 10 million plus homes sold in Dubai between January and June were on the Palm Jumeirah.

“Villas remain in high demand as both resident expats and international investors home in the most prestigious parts of the city to secure larger and more luxurious homes. The pandemic has taught us all the importance of personal space and with a shift to hybrid working models emerging as the norm, families are seeking accommodation that delivers on space, luxury and exclusivity. This accelerating trend has driven average transacted villa prices on the Palm Jumeirah up by an impressive 40% over the last four years.” 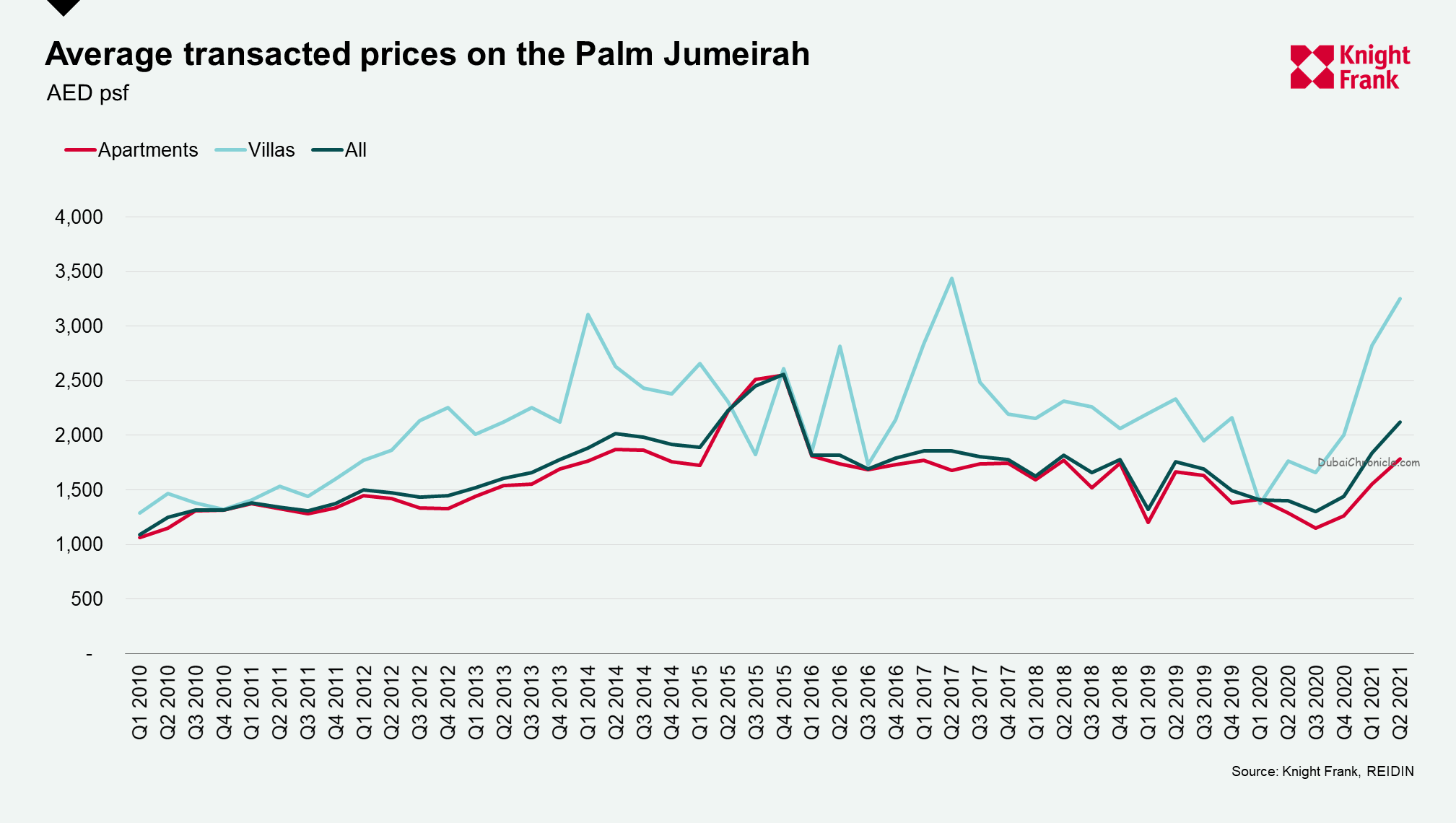 Knight Frank notes that a new record was set in July with the USD 32.9 million sale of a villa on Jumeirah Bay Island to a European buyer, highlighting the buoyancy in the villa market. And prior to the sale of the Jumeirah Bay Island mansion, the most expensive home to sell in 2021 was on the Palm Jumeirah, where One100 Palm sold for over USD 30 million in March.

“The Palm Jumeirah is really coming into its own. The recent opening of Nakheel Mall has helped to cement the amenities available to the island’s residents, helping to create not only an exclusive enclave, but one that epitomises the very definition of a 15-minute city; an emerging and highly desirable legacy trend of the pandemic globally”, added Durrani.

Apartments on the Palm Jumeirah have also enjoyed a resurgence in transactional activity, with 300 flats selling in Q2 alone; the highest since Q3 2015. And not only that, but the average apartment deal size now stands at almost AED 1,800 psf, the highest level since 2016, according to Knight Frank’s analysis.

Yasin Valimulla, Associate Partner at Knight Frank Middle East added “There has certainly been a very healthy number of transactions for Q2 2021 with record breaking months and sales prices. Apartment sales make up a large proportion of transactions with a number of high value transactions for the boutique developments such as Palme Couture, Atlantis The Royal, One Palm and W Residences. Villa and townhouse sales remained strong, continuing on from the Q1 2021 momentum, and prices saw a sharp increase compared to the previous quarters. The villa market has always proven to have its own micro market and with so many transactions happening, we are seeing price expectation increasing with the demand being higher than the current villa supply. This has been evident with both sales and rentals transactions.”