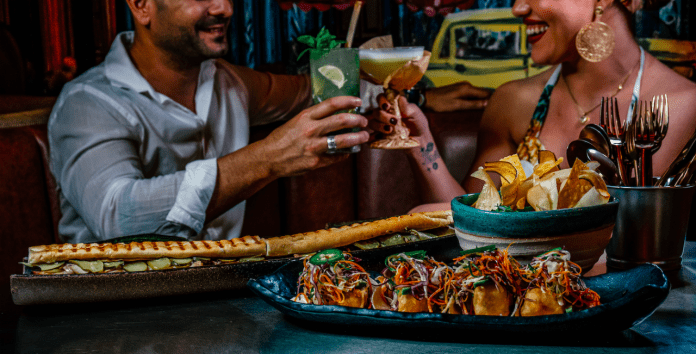 Situated in front of the blissful beach of Club Vista Mare at The Palm Jumeirah, a new destination has recently opened its doors for the trendy gastronomists of Dubai. A lively and dynamic atmosphere awaits those who step in the traditional entradas of Rumba Cuban Bar & Kitchen, as guests are transported to the classic Havana of the 1950s. The casual bar and restaurant oozes authentic Cuban culture throughout the property, from its mouth-watering cuisine and extensive range of exceptional beverages, to fine cigars, intricate Cuban-inspired interiors, and pure energetic Hispanic vibes, making Rumba the new hotspot in the city.

The brainchild of a native Cuban-born General Manager, Alberto Cuello, Rumba Cuban Bar & Kitchen was years in the making before Alberto’s vision of bringing Havana to Dubai finally came true. Rumba, to some, may only be a dance rhythm however, Alberto Cuello believes Rumba is a way of life that residents of the UAE need to embrace and experience. Bringing the same passion to life, Mexican Head Chef, Rene Manzanilla, and Peruvian Sous Chef, Carlos Pazos, worked closely alongside Alberto Cuello to create a unique Cuban/Latin-American menu, fused with authentic flavours and aromas to showcase the Rumba way of life. The three amigos strive to offer an unrivalled Havana-inspired experience to all guests who visit Rumba, from the food and drinks, to the décor and the lively Hispanic atmosphere.

Columbian-born artist Jose Luis Quiceno, is the maestro behind the intricate interior detailing of the venue, boasting fashioned ornate characteristics and designs that showcase unconventional Hispanic artistry. From the intricately hand-painted murals that depict the old streets of Havana, to the traditional entryways from Cuban homes, the elaborate features of Rumba aims to transport guests to the streets of Cuba and immerse themselves in the culture and art of the Caribbean. As guests enter Rumba, they will be welcomed with a large antique chandelier accompanied by a wall of family portraits before entering the main restaurant, before being seated in vintage seats, both of which are common in the Havana residences from the mid-20th century. In the core of Rumba’s eccentric interior lies Casa Rumba, the exquisite cigar lounge built for diners who wish to relax in a sophisticated haven at Rumba. The fine lounge offers superior Cuban cigars to guests, where they can choose from an extensive list of cigars to suit all tastes.

Rumba Cuban Bar & Kitchen brings eclectic energy and spontaneous entertainment to the city, no matter the time of day. The restaurant and lounge area offer diners the feel-good atmosphere that can be enjoyed with undisputed and indulgent Cuban / Latin-American cuisine, whilst being charmed by the showstopping entertainers. The beachfront terrace also allows for the perfect sundowner spot to relax and sip on some Cuban-inspired cocktails, refreshing glasses of grape as they ‘Rumba’ to Latin American beats played by the resident DJ Mauro.

From dining and bar experiences, to the lounge, terrace and beach areas, Rumba erupts in a spontaneous gathering of lively colors, traditional Cuban cuisine, and the syncopated rhythms of music and dance. The newly opened restaurant hopes to set out a new way of life and bring the heart of Havana to Dubai.