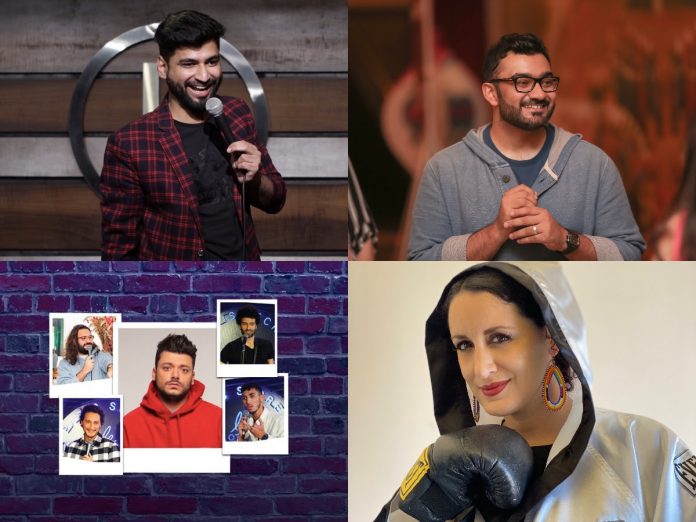 Dubai Comedy Festival is set to welcome some of the funniest people on the planet to Dubai, from the 13th to 22nd of May, and the world of laughs just keeps getting bigger and better. Presented by Dubai Calendar and produced by BRAG, Live Nation and Dxb Live, Dubai Comedy Festival has now unveiled the latest comedians to join its 2021 edition, with Ali Al Sayed, Harsh Gujral, Mina Liccione, and Kev Adams all set to perform as part of the city-wide comedy takeover.

Featuring performances by Gad Elmaleh, Eddie Griffin, Maz Jobrani and Nemr, as well as popular Russian comedians Alexander Revva, Mikhail Galustyanand Yevgeniy Chebatkov,Dubai Comedy Festival will take place over 10 days and nights in multiple hotspots across the city. Bigger, better and funnier than ever, the festival will have lots of new elements to look forward to and plenty of surprises along the way, so stay tuned for even more announcements very soon.

Dubai-based Ali Al Sayed’s lightning-fast wit and rapport with audiences has allowed him to perform numerous shows in the iconic Comic Strip Live in New York, as well as major international gigs at the Edinburgh Fringe Festival and Theatre of Change Festival in Greece. As the Co-founder of Dubomedy, Ali co-started the first comedy school in the region, introducing stand-up comedy from an Arab perspective and paving the way for many young comedians. Ali is involved in the Dubai Comedy Festival as a curator and performer and has shared the stage with the likes of Dave Chappelle and Trevor Noah. He has also appeared on three seasons of ‘Comedy Central Presents: Stand Up’.

Catch Ali Al Sayed’s side-splittingly funny stand-up comedy live at The Theatre at Mall of the Emirates on Friday, the 14thof May.

Harsh is a Dabangg guy from Kanpur who cracks jokes on his life experiences. With a strong personality, he also has strong comedy sets to tickle your funny bones.You’ll onlywant to sit in the first few rows if you’re feeling brave, because Gujral loves to get the audience involved, and he won’t hold back from roasting anyone he sees. His droll takes on everyday life situations, butwill be sure to leave you in stitches, no matter where you’re seated.

Get set for an outrageously hilarious night of laughs with Harsh Gujral on Saturday, the 15thof May 2021, at The Theatre at Mall of the Emirates.

Mina Liccione is a multi-award-winning performing artist and comedian hailing from New York. She has been seen on Broadway in ‘STOMP’, MTV’s ‘The Grind’, and all threeseasons of Comedy Central’s ‘Comedy Central Presents…’TV show,as well as season twoof ‘Ridiculousness’. In 2008, she co-founded Dubomedy Arts with her husband Ali Al Sayed,which is home to the region’s first comedy school and all-female troupe:Funny Girls UAE. Mina filmed her debut one-hour stand-up special entitled ‘Mina Liccione: Araby By Nature’in 2017,acting as the first female comedian to do so in the Middle East. Her second special is currently airing on Comedy Central and Wavo.

Don’t miss the show of a lifetime – Growing Up Ringside – by Mina Liccione at The Theatre at Mall of the Emirates on Thursday, the 20thof May 2021.

Acclaimed prodigy of French humour, Kev Adams will be coming to Dubai for the very first time for Dubai Comedy Festival. On this unique occasion, Kev will stop at nothing to give the audience a phenomenal experience that leaves them roaring with laughter. The multi-talented, Parisian-born, comedy star has many surprises up his sleeve, including guest appearances by his hilarious group of friends, including Ilyes Djadel, Alex Fredo, David Azria, and more.

Get ready to laugh out loud with Kev Adams & Friends at The Theatre at Mall of the Emirates on Saturday, the 22ndof May 2021. Grab your tickets Now!

Expo 2020 Launches Official Song ‘This Is Our Time’