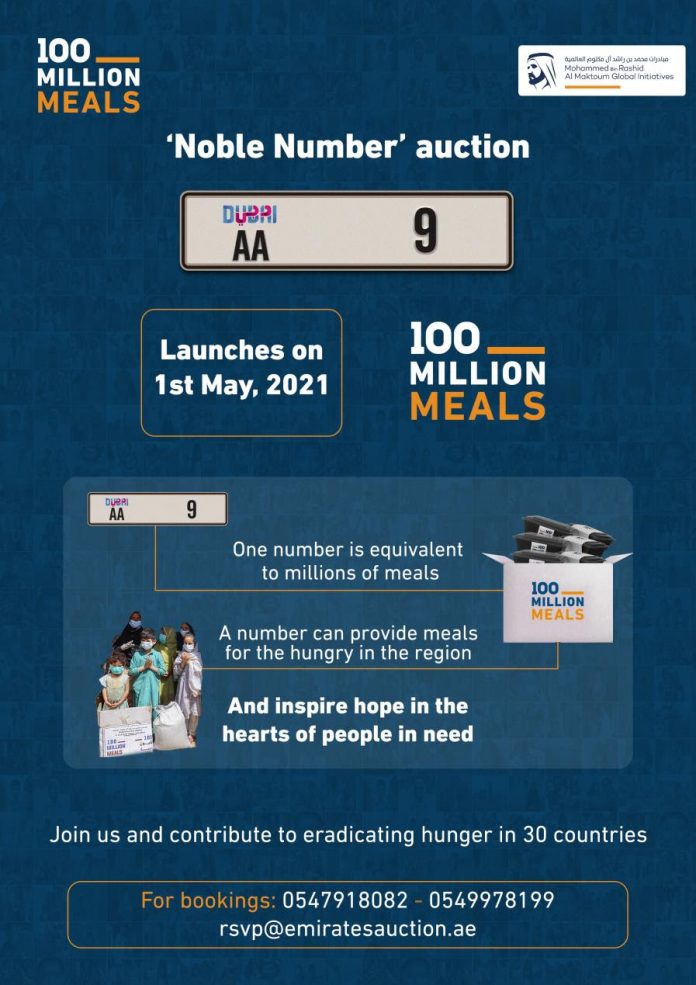 Mohammed bin Rashid Al Maktoum Global Initiatives, in partnership with the Roads and Transport Authority in Dubai, Etisalat, and Emirates Auction, will organize a charity auction to sell off special car plate numbers and mobile numbers to support the ‘100 Million Meals’ campaign.

Proceeds of ‘The Most Noble Numbers’ auction, to be held on Saturday May 1, at Hilton Dubai Al Habtoor City, will go towards providing food aid for disadvantaged individuals and families across 30 countries during the Holy Month of Ramadan.

The auction will enable bidders to own exclusive numbers, while contributing to a good cause.

Distribution of food parcels has already begun in several countries as part of the ‘100 Million Meals’ campaign, in an integrated network of collaborations between the campaign’s organizer MBRGI and local and international partners in each beneficiary country. Food parcels will empower individuals and families to prepare their own meals throughout Ramadan.

Up for bidding will be single-digit car plate numbers, such as AA9, and two-digit number plates including U31, T38, and E51.

‘The Most Noble Numbers’ charity auction is an addition to the four main donation channels available. First, the campaign website www.100millionmeals.ae,; second, the call center on the toll-free number 8004999; third, the designated bank account through Dubai Islamic Bank (AE08 0240 0015 2097 7815 201); and  fourth, SMS by sending “Meal” on specified UAE numbers (Etisalat and Du) listed on the website.

The auction aims to support the ‘100 Million Meals’ campaign’s efforts to establish solidarity with those in need and help fight world hunger and malnutrition.

His Excellency Mattar Mohammed Al Tayer, Director General, Chairman of the Board of Executive Directors of the Roads and Transport Authority, said: “We familiar with the innovative approach to community initiatives by His Highness Sheikh Mohammed bin Rashid Al Maktoum, Vice President and Prime Minister of the UAE and Ruler of Dubai, especially during festive seasons. His Highness’s initiative to provide 100 million meals is a valuable charitable and humanitarian work, in terms of the number of beneficiaries, and the great engagement witnessed from organizations and individuals since its launch. All donors came together to contribute to achieving the goals of this noble campaign, especially as it extends to provide relief to those suffering from one of the most severe disadvantages – hunger. The initiative reflects the continuation of the giving nature of the UAE, which includes various sectors such as education, health, relief and knowledge.”

His Excellency Al Tayer noted that he is delighted for the RTA to participate in this unique campaign and contribute to its success. He said: “The Roads and Transport Authority in Dubai believes in the right of people to have food. We support the efforts of the wise leadership to provide food and a decent life for those in need, which is one of the priorities of the UAE – seeking happiness for the people of the world.”

He added: “The humanitarian initiatives launched by His Highness Sheikh Mohammed bin Rashid Al Maktoum inspired a vast number of organizations, businessmen, and philanthropists to mobilize in support of the campaign. It instilled the noble values, such as generosity and extending a helping hand, for which the UAE is known for.”

For his part, Abdullah Salem Al Mana, General Manager,  Etisalat – Dubai, said: “Etisalat is proud to participate in the charity auction for the 100 Million Meals campaign launched by Mohammed bin Rashid Al Maktoum Global Initiatives. Through allocating special numbers, the proceeds of which will go to support the campaign, we strengthen the UAE’s pioneering status in charitable work and humanitarian aid to help communities in the region face the repercussions of the coronavirus pandemic. In line with our corporate social responsibility, to support humanitarian and charitable initiatives and extend a helping hand during the Holy month of Ramadan, Etisalat offers a channel for donations to the 100 Million Meals campaign through the Smiles app, in addition to SMS, and changing the network logo to increase awareness of the campaign.”

His Excellency Abdullah Matar Al Mannai, Chairman and Managing Director of Emirates Auction, said: “His Highness Sheikh Mohammed bin Rashid Al Maktoum, Vice President and Prime Minister of the UAE and Ruler of Dubai, is a philanthropic leader in the region. He inspired us to open the doors of kindness and empower different segments of society during the Holy month of Ramadan. Raising funds for the ‘100 Million Meals’ campaign is the least we can offer in gratitude to our nation and its leadership that instilled in their people a love for giving, positioning the UAE among the most generous countries in the world. Our support for the campaign is also in line with the company’s commitment to corporate social responsibility and humanitarian responsibility to support those in need.”

The ‘100 Million Meals’ campaign falls under the humanitarian aid and relief pillar, one of the five pillars that classifies MBRGI’s work, which is devoted to supporting and empowering vulnerable and disadvantaged communities around the world, regardless of race, religion, or geographical region.

The campaign is carried out by the MBRGI, in collaboration with the UN World Food Programme, Mohammed bin Rashid Al Maktoum Humanitarian and Charity Establishment, Food Banking Regional Network, and local food banks and humanitarian and charity institutions in the 30 beneficiary countries.