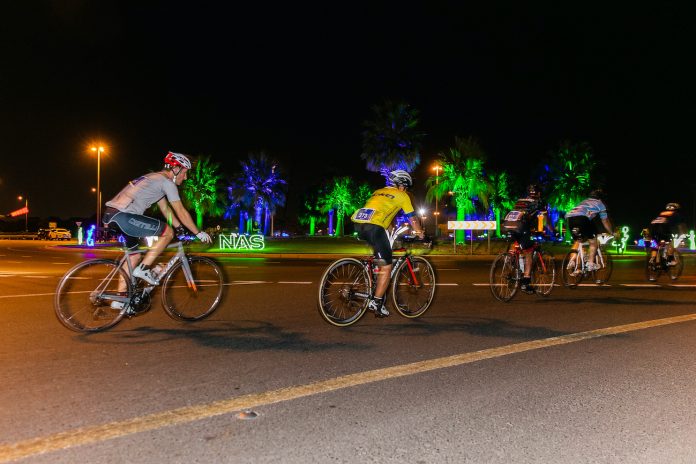 The Cycling Championship will take place across three nights from April 22-24.

The organizing committee of Nad Al Sheba Sports Tournament has announced exciting prizes for this year’s 75km NAS Cycling Championships, which will take place across three nights from April 22 to 24 with competition in six different categories for a total prize purse of AED 360,000.

Organised by Dubai Sports Council, the annual NAS Sports Tournament is coming back for its eighth season in the Holy Month of Ramadan, with competition in three different sports – padel tennis, running and cycling – and the Tournament will be organized in compliance with all COVID-19 precautionary measures and protocols, as well as other guidelines issued by relevant authorities.

The two Open categories are for Emiratis and residents, who have represented clubs or their national team in official races within and outside the country, while the two Emirati Amateur categories is for Emirati men and women who do not belong to any club team nor do they have an official card issued by UAE Cycling Federation stating their registration with one of the local cycling clubs.

The Open category race for men will take place on Thursday, April 22, while Friday night will see competitors from four different categories – Open Women, Emirati Amateur Women, and People of Determination on Road Bicycles and Hand Bicycles – in action. Emirati Amateur Men, meanwhile, will compete on the third night.

All races will start from Falcon and Heritage Sports Centre in Nad Al Sheba, with the first group being flagged off at 10pm and the others following in batches, with a maximum interval of two minutes between each batch.

This year’s 75km NAS Cycling Championship will feature competition in six different categories, with exciting prizes in each. There will be a total of AED 122,400 on offer for the Top 9 in the two Open categories, with the winners among the men and women each getting AED 18,000. The runners-up will receive AED 12,000 each and third-place will be worth AED 9,600. Those finishing between 4th to 9th on the two Open category leaderboards will take home AED 3,600 each.

In the Emirati Amateur category for Men and Women, there will be a total prize purse of AED 180,000 for the Top 9 with the two winners taking home AED 26,400 each. Second place will be worth AED 20,400 each, while those finishing third will take home cheques of AED 14,400 each. There will be prizes for the fourth to ninth placed as well, with each of them taking home AED 4,800.

In the two People Of Determination categories – Road Bicycles and Hand Bicycles – there is a total of AED 57,600 on offer for the top three with the two winners receiving a cheque of AED 12,000 each, the runners-up getting AED 9,600 each and third-place receiving AED 7,200 each.

The 2021 NAS Cycling Championship is open to all amateur citizens and residents of UAE, but they should be 18 years of age or older (Born on 21/4/2003 or earlier), and there are also restrictions on the type of bicycles allowed.

Bikes with TT handlebars (aerobars or triathlon bars, which are handlebar extensions with padded forearm rests) are not permitted, along with MTB (mountain bicycles) and bikes used for time trial cycling, and any participant using them will be disqualified.

All participants will have to give an undertaking they are medically fit to participate, and they will also have to take a COVID-19 PCR test 72 hours before the race and submit proof of a negative COVID-19 (PCR) test upon receipt of the chest and chip numbers, which will be distributed at Dubai Bike (DXBIKE) in Nad Al Sheba on April 20 and 21 only, between 4:00pm and 11:00pm. The chest and chip numbers will not be available for collection on race day.

All Participants will have to bring their original Emirates ID (for Expats, the residence VISA must have been issued before 1/1/2021), and they will have to make sure they are fully aware of the rules and regulations as well as the race route, and take responsibility for the errors they might commit and the damage that may result to either themselves, their bikes, or other participants. They will also have to abide by the right side of the road in case they are delayed and caught up with by other competitors. Non-compliance will lead to disqualification.