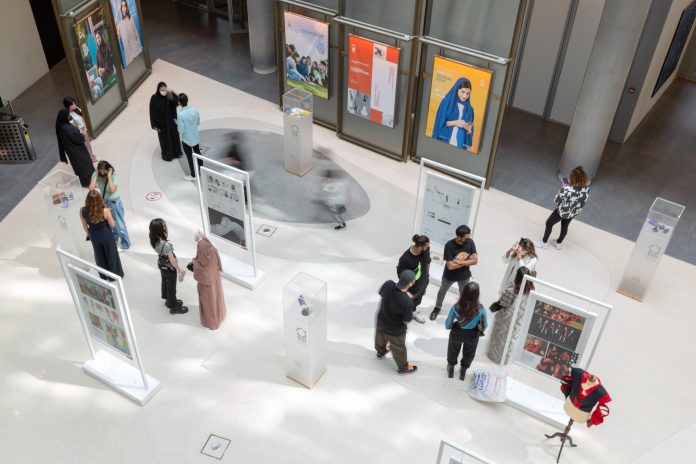 Climate change, robotics and sustainable fashion are among the issues Dubai Institute of Design and Innovation (DIDI) students have addressed in a new 22-piece exhibition debuting at Art Dubai.

Makers of Change: Design at DIDI in 22 Projects will unveil a body of student projects displaying the power of creativity and innovation as agents of social change. It kicks off on 29 March in Dubai Design District (d3), as part of the six-days Art Dubai festival that will feature 50 galleries from 31 countries.

As the region’s only university exclusively dedicated to design and innovation, DIDI’s exhibition will showcase dozens of potentially game-changing, student-designed products and prototypes. They include a new biodegradable material made using food industry by-product waste, a device that translates colours into sound allowing blind people to ‘see’ art, and a sustainable clothing line designed to empower women and reduce fast fashion’s environmental impact.

Commenting on the university’s participation, Mohammad Abdullah, President of DIDI said: “From climate change and food waste to health and wellbeing, our students use design and technology every day to address some of the world’s most pressing global issues. We need to empower them by preparing the next generation of talent for a world where today’s jobs may not exist in the future. And at DIDI, we do this by blending tech fluency, visual literacy and strategic proficiency to augment Dubai’s knowledge and innovation-based economy and create a new cadre of highly-skilled professionals. We are excited that our students will be able to share their work with an art-loving global audience because design matters more than ever before.”

Established in 2018, DIDI offers the region’s first integrated Bachelor of Design degree with the curriculum created in collaboration with the Massachusetts Institute of Technology (MIT) and Parsons New School of Design in New York.

Students are empowered to map out their own cross-concentration study path by exploring two concentrations from four: Product Design, Multimedia Design, Fashion Design and Strategic Design Management. This ‘combinatory education’ prepares them for future career pathways and develops complex problem solving, creativity and critical thinking – skills the World Economic Forum says are vital for success in the Fourth Industrial Revolution.

Makers of Change: Design at DIDI in 22 Projects

Camouflage
Maha Abdalla’s Camouflage collection is inspired by, and designed for, women who have faced body shaming or fight body insecurities. The development and construction of an interlocking fabric system using laser cutting techniques allows a prolonged garment lifespan of up to 10 years.

Shameless
Amal Alsuwaidi’s Shameless is a garment created to mourn the loss of planet earth to the pollution and destructiveness of mankind. To create this garment, she grew biodegradable material made out of kombucha used it for fabric.

Floof and Friends
Aysha Alsuwaidi and Shamma Almulla collaborated to design Floof and Friends, an educational flashcard game designed for children. Its aim is to improve early childhood development skills in a fun and exciting way as well as reduce screen time and give a way for parents and children to bond.

Judur
Judhur uses nutrient-rich date seeds to create new biodeghrable materials, producers and revenue streams for farmers and manufacturers from a wasted bi-product in the food industry. The project is the work of three students: Alhaan Ahmed, Abdulaziz Al Zamil and Heba Naji.

Aibo
Designed by Alhaan Ahmed, Aibo is a light that helps you stay connected and reach out for help from those around you in times of crisis. You may need medication, food, someone to talk to, etc. Using Aibo you can communicate your needs to your neighbours and seek help with ease.

Inner Voice is a sound-healing device that detects human emotions and stress through GSR sensors and plays music according to the user stress level. Created by Sana Mohamed, it is integrated within the computer mouse, allowing the users to extend the limits of their performance at work. The bio-signals derived from the user’s body controls the computer when the stress exceeds certain limits by sending warning messages on the screen; meanwhile, the healing sounds start to play.

Soja
Based on a futuristic scenario in which people begin to adapt to their own circadian rhythms instead of nine-to-five schedules, Soja (which means ‘go to sleep’ in Hindi) is an alarm clock that follows your natural, pre-set genetic sleep cycle. It was designed by Aditi Monga.

HUGO
Zinah Issa created HUGO, an empathic symbiotic creature that interacts with humans, responding to their emotional state. It is a portable inflatable soft robot designed to provide individuals with a fulfilling and immersive experience. HUGO’s unique physical composition mimics the comforting embrace of a human being, yet still maintaining an identity of its own with the different motions it possesses. HUGO’s structure consists of distinct physical attributes, each part simulates a peculiar sensation, breathing life into this inanimate object and creating an intimate emotional bond between HUGO and the user.

The Lamp Between Us
Abdulaziz Al Zamil’s love lamps allow users to communicate using light and touch from any distance at any time. They contain advanced IoT chips connected to a selected server which allows each lamp to send and receive data between each other. This allows products to act as agents between us which later on will create relationships between the users and their products. “you have to give in order to receive”.

Breathless
Pavwan Malik’s Breathless is a weighing scale that breathes to encourage healthy weight loss by eliminating numbers and transforming digits to inflation through gas volumes.

An online memorial platform aimed to memorialise the lives lost globally in the Covid-19 pandemic. It allows these individuals to be honoured and remembered whilst ensuring the chance to say goodbye. As the Covid-19 pandemic brings with it the vital task of social distancing, commemorating these individuals in traditional memorial settings has become increasingly difficult. By creating an online space, the student designers – Aysha Alsuwaidi, Mona Itani and Anabella Milner – are doing our part to give people the chance to practice the innate human quality to mourn.

CoLive 20
A web-based platform that encourages users to share their experiences and emotions during a global pandemic. These conversations serve as a repository to reflect hack on this moment of time and write history through the perspective of the people. It was created by a five-person team: Amber Lowe, Ahsan Murad, Hoor Bakhit, Nayef Albastaki, Nikhilesh Mohan.

3C
3C is a social robot designed to interact with nature and humans designed by Dalilah Mansour. The goal is to consolidate our connection with both plants and humans through the use of technology. 3C creates three emotional connections between humans and plants: this entity, Indeed, stimulates all our senses through movement, light, and sound. 3C can connect you with your loved ones at a distance or alternatively if you do not take care of your plants it can choose to not react to your presence and close itself completely. The robot is made out of bioplastics and wood.

The Copyplant
The Copyplant is a system for future automated building structures inspired by the concept of symbiotic mutualism. The system is activated by proximity sensors and plants: once the plant reaches a specific height, the structure of the Copyplant will transform and grow to the same height. They mimic each other’s actions to evolve together. It was designed by Fatima Al Halyan.

PANIC!
Panic is a team-building game designed to optimise interaction and communication between different teams and team members within an organisation that was created by Abdulaziz Alzamil, Alhaan Ahmed, Hashir Pervez and Nikhilesh Mohan.

Illuminate
Designed by Shamma Alshamsi, Illuminate is a symiotic creature exploring the concept of dynamic shape display. It is the rendering of 3D forms from physical content by turning digital information into physical forms.

Snakes and Ladders
Snakes and Ladders is a board game that makes filling out the business model canvas easier and much more entertaining. The drive behind initiating this game is the frustration individuals go through while filling it out. Adapting the business model canvas into a team orientated game allows strategies to be more useful, enjoyable, and collaborative, designed by Anabella Joy Milner, Rahmeh Al Assaf, Tania Dubayssi and Maha Basaeed.