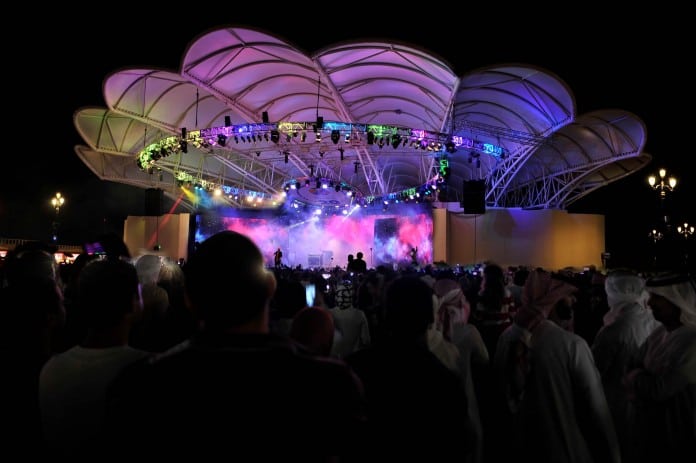 International rock stars, Arabic singing sensations, DJs and music legends will perform at venues around the city during the Dubai Shopping Festival (DSF). Launched on 17 December and running until 30 January 2021, this latest edition of DSF features an eclectic and exciting range of musical genres and performers from all over the world, with more great acts to be announced in the next few weeks.

Dubai Festivals and Retail Establishment (DFRE), organisers of DSF, has put together a musically diverse lineup, with great concerts adding to the super shopping deals and entertainment to wow visitors and residents. Each concert will take place in accordance with Dubai Government’s strict health and safety rules and regulations, including temperature checks taken at all entry points, social distancing rules enforced and a mandatory masks rule at all times.

DFRE highlights some of the great acts that will take to the stage at venues around Dubai as part of DSF’s musical celebrations.

On 31 December, Fans of Arabic pop sensation Nassif Zeytoun can watch him perform some of his best songs in a New Year’s Eve show at the Dubai World Trade Centre. Nicknamed ‘Abou Elias’, Nassif is much loved across the region for his hit song ‘Mesh Aam Tezbat Maae’ among other popular tracks. His NYE concert will thrill Arabic music fans of all ages as they welcome in 2021. Tickets are available from www.dubai.platinumlist.net and www.dubaicalendar.com

Also on 31 December, DJ Said Mrad will spin some of his greatest and most influential hits at the Dubai Opera’s New Year’s Eve 2021 Show. A true hero in the world of Arabic electronic music, DJ Said will perform as part of a great program of talented artists, including DJ Saif & Sound and Carrie Gibson’s Nuvo Soul Band. The venue will be fully seated for the NYE show with food and drinks served to guests at their table. Tickets are available from www.dubaiopera.com and www.dubaicalendar.com

On 31 December Arabic stars Wael Kfoury and Mouhamad Khairy will each perform in front of an audience for a special New Year’s Eve double bill show at the Festival Arena, Dubai Festival City. Celebrated for his romantic and heartfelt love songs, Wael will welcome in 2021, while Mouhamad will delight fans of his music. Tickets are available from www.dubai.platinumlist.net and www.dubaicalendar.com

On New Year’s Eve, 31 December, music lovers can give 2020 the biggest possible send off at Atlantis, The Palm’s New Year’s Eve concert featuring rock’n’roll legends KISS. The event will see the legendary band hold the most spectacular live concert Dubai has ever witnessed, with a huge performance featuring incredible pyrotechnics and classic rock music anthems. The show, which will be filmed by more than 50 cameras providing 360-degree views, will be streamed live online from 9pm. For more information, visit www.kiss2020goodbye.com.

The last evening of 2020, 31 December, will see the charismatic Lolita perform at what promises to be a memorable New Year’s Eve party at the Burj Al Arab. A firm favourite with Russian language music fans, Lolita will sing her biggest and best songs as part of the gala evening at the iconic Dubai hotel in Jumeirah. For tickets, visit www.dubai.platinumlist.net and www.dubaicalendar.com

Coca-Cola Arena will stage a concert by artist, DJ and producer Alan Walker on 7 January 2021. A strong addition to DSF’s lineup, Alan is one of the world’s most popular EDM musicians and a pioneer in the genre, with his songs clocking up millions of views on YouTube, and even more listens on SoundCloud and other online music platforms. Tickets can be purchased at www.bookmyshow.com and www.dubaicalendar.com

Acclaimed musician and performer Mark Eliyahu will bring his ‘Endless Tour’ show to Dubai for the very first time with an extra special performance at the Dubai World Trade Centre on 8 January 2021. Skilled in the kamancheh, a traditional stringed instrument, Mark has serenaded crowds all over the world with his musical skills and on-stage charm. Tickets for his debut concert in Dubai are available from www.dubai.platinumlist.net and www.dubaicalendar.com

Atif Aslam will wow fans new and old with his smooth vocals and endearing talent at Sheikh Rashid Hall at the Dubai World Trade Centre on 15 January 2021. A huge star, Atif is the maestro behind big hits known around the world. His ability to work a crowd, coupled with his wonderful singing skills, has made him one of the most sought-after performers and a big draw for Urdu and Hindi language music lovers. Tickets are available from www.dubai.platinumlist.net and www.dubaicalendar.com

One of the world’s biggest stars and a true icon of the Arabic music scene, Amr Diab will take to the stage for a live show on 22 January 2021 at the Dubai International Stadium. An accomplished actor, composer and singer, Amr has won countless music industry awards, sold huge amounts of records and is loved by millions of fans around the region and the globe. Tickets are available from www.800tickets.com and www.dubaicalendar.com

The Dubai Opera’s DSF live music lineup will continue into the new year, with a performance by the legendary Enrico Macias and Al Orchestra on 22 January 2021. Tickets for this extra special concert by a much-loved star and musical icon are available from www.dubaiopera.com and www.dubaicalendar.com