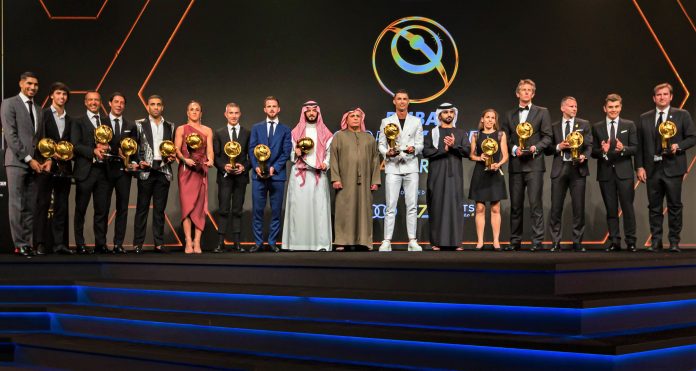 Cristiano Ronaldo is leading both the Player of the Year and Player of the Century categories of the 2020 Dubai Globe Soccer Awards following the end of the second and final stage of voting by fans at midnight on December 21.

More than 13 million fans voted for their favourites in the second stage of the voting, taking the aggregate of fan votes for this year’s Dubai Globe Soccer Awards, which is organised in collaboration with Dubai Sports Council and Dubai International Sports Conference, to more than 21 million. More than 8 million fans had voted in the first round of voting.

The fan votes, however, have only 40 per cent weightage in deciding the winners. The votes by the Awards’ jury has a 60 per cent weightage and the final winners will be announced after taking the jury votes into count at a glittering ceremony on December 27 at the Armani Hotel in Burj Khalifa.

Before the Awards ceremony, some of football’s biggest stars, including Bayern Munich and Poland ace Robert Lewandowski, will take part in the Dubai International Sports Conference, which is a Mohammed Bin Rashid Al Maktoum Global Initiative, and is being organised this year under the theme “Football at the Top” by Dubai Sports Council.

The 35-year-old Ronaldo, who has won seven league titles in three different European countries, five UEFA Champions League and four FIFA Club World Cups, as well as UEFA European Championship and UEFA Nations League with Portugal, has received 38 per cent of the fans votes in the Player of the Century (2001-2020) awards, while Barcelona and Argentina ace Lionel Messi is a distant second with 24 percent votes. Liverpool and Egypt star Mohamed Salah is in third with 23 per cent of the votes, while former Brazilian ace Ronaldinho is fourth with 14 per cent of the votes.

In the fan votes for the Player of the Year, Juventus ace Ronaldo has polled 42 per cent votes, while Lewandowski is second with 38 per cent, and Messi third with 20 per cent.
In the battle for the Club of the Year, Bayern Munich – winner of the Champions League, Bundesliga, and DFB-Pokal treble – have polled the highest percentage of fan votes – 44 per cent – while Liverpool are a distant second with 33 per cent, and Real Madrid are in third with 23 per cent.

In the battle for Coach of the Year, two Germans – Liverpool’s Jurgen Klopp and Hans-Dieter Flick of Bayern Munich – are locked in a tight battle with 49 and 46 per cent of the fan votes, while Gian Piero Gasperini, manager of Italian club Atalanta, is a distant third with 5 per cent of the votes.

In the Agent of the Century (2001-2020) category, Portuguese “Super Agent” Jorge Mendes tops the list with 66 per cent of the votes, ahead of Dutchman Mino Raiola (22 per cent), and Italy’s Giovanni Branchini (13 per cent).