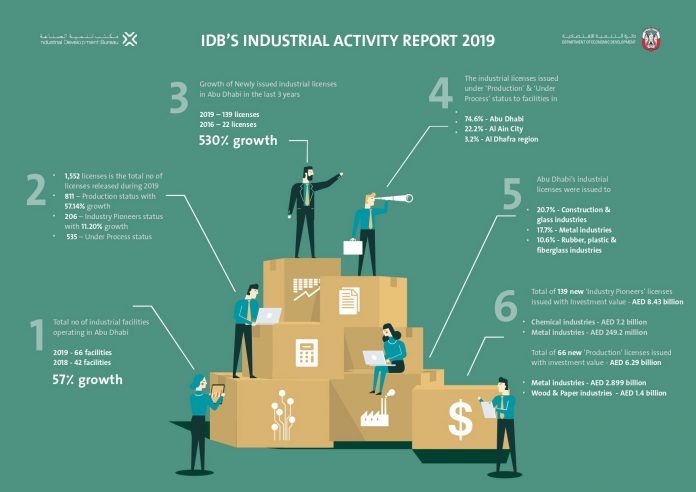 The number of industrial facilities operating in Abu Dhabi grew by more than 57 percent in 2019 to reach 66 facilities – recording a combined investment value of AED 6.29 billion – as opposed to 42 facilities in 2018, according to the latest edition of the annual Industrial Activity report issued by the Industrial Development Bureau (IDB) of the Abu Dhabi Department of Economic Development (ADDED).

The latest IDB report highlights the most significant statistics showcasing the local industrial sector’s performance during the previous year. A total of 1,552 industrial licenses, comprising 811 with ‘Production’ status; 535,‘Under Process;’and 206, ‘Industry Pioneers,’were released by the end of 2019.

H.E. Rashed Abdul Karim Al Balooshi, Undersecretary, ADDED, said that the report reflects the significant role of IDB in fostering a business-friendly environment in Abu Dhabi and ensuring a positive and preferable investment environment for the local industrial sector. Al Balooshi added that IDB continues to design solutions to the challenges facing the industrial sector through the implementation of strategic initiatives that support the industrial investors.

Moreover, Al Balooshi pointed out the positive impact of the electricity Tariff Incentive Program (ETIP) on the industrial sector. ETIP was launched last year as part of the Abu Dhabi Government’s accelerator programme ‘Ghadan 21.’A new initiative to be launched this February is also expected to contribute to the sector’s growth by reinforcing public-private partnerships and increasing the private sector’s contribution to Abu Dhabi’s gross domestic product (GDP).

Al Balooshi attributed the growth in the issued industrial licenses in Abu Dhabi over the past three years to IDB’s ongoing efforts, noting a530 percent growth in 2019to reach139 newly issued licenses compared to 22 licenses in 2016.

H.E.emphasized ADDED’s keenness to facilitate licensing procedures for industrial facilities, with the aim of attracting more foreign and local investments to the industrial sector. While 2019 witnessed a considerable growth in the number of issued industrial licenses in Abu Dhabi, ADDED aims to double the number in Abu Dhabi, Al Ain City, and Al Dhafra.

“Under the ‘Industrial Pioneers’ category, the 2019 Industrial Activity report recorded a 11.20 per cent growth compared to 2018,which reflects the industrial investors’ interest to seek investment opportunities inAbu Dhabi.The number of industrial facilities with‘Production’ status also increased in 2019 by 57.14 percent compared to the figures issued in 2018,” Al Balooshi said.

He added: “These figures give credence to ADDED’s endeavors geared towards boosting Abu Dhabi’s sustainable development and economic diversification efforts, with a special emphasis on the non-oil sectors. Our ongoing endeavors are in response to our leaders’ directive to raise the emirate’s global competitiveness.ADDED will remain a key contributor to the sustainable development of various non-oil sectors.”

TheIDB reportalso recorded a5.7 per cent increase in industrial license renewals applied by facilities with ‘Production’ status. A total of 732 licenses were issued in 2019 compared with 696 licenses in 2018. Those with ‘Under Process’ status saw a cumulative growth rate of9.53 percent since 2016. An increase of 3.32 per cent was posted in 2019in comparison to 2018.

For his part, H.E. Mohammed Munif Al Mansouri, Executive Director, ADDED’s IDB, reiterated that the bureau would continue to support the industrial sector, one of the key economic drivers in Abu Dhabi. He also highlighted IDB’s achievements in 2019 in line with Abu Dhabi Government’s vision towards supporting the non-oil sectors.

He added: “IDB achieved its objectives in 2019. We continue to encourage local and foreign investors to initiate their industrial businesses in Abu Dhabi by adopting leading programs and initiatives launched and executed by ADDED. These programs and initiatives are designed to support the industrial facilities and increase the productivity of local non-oil products.”

In addition, as per IDB’s Industrial Activity report, the 811 industrial licenses issued to facilities with ‘Production’ status covered various manufacturing activities. The construction and glass industries constituted the majority with a total of 170 licenses, followed by metal industries at 160 and rubber, plastic, and fiberglass industries at 90 licenses.

Additionally, 66 industrial licenses were issued to establishments with ‘Production’ status that were previously classified as ‘Under Process,’ achieving a 57.14 percent growth compared to42 transferred licenses in 2018.The investment value of the selicenses amounted to AED 6.29 billion, with the metal industries accounting for around AED 2.899 billion while the wood and paper industries constituting more than AED 1.4 billion.

Similarly, under renewed licenses with ‘Production’ status, a 2.66 percent growth rate was achieved in 2019to reach 732 compared to 713 licenses in 2018. Likewise, 249 industrial licenses of facilities with ‘Under Process’ status were renewed last year compared to 241 licenses in 2018, recording a 3.32 per cent increase.