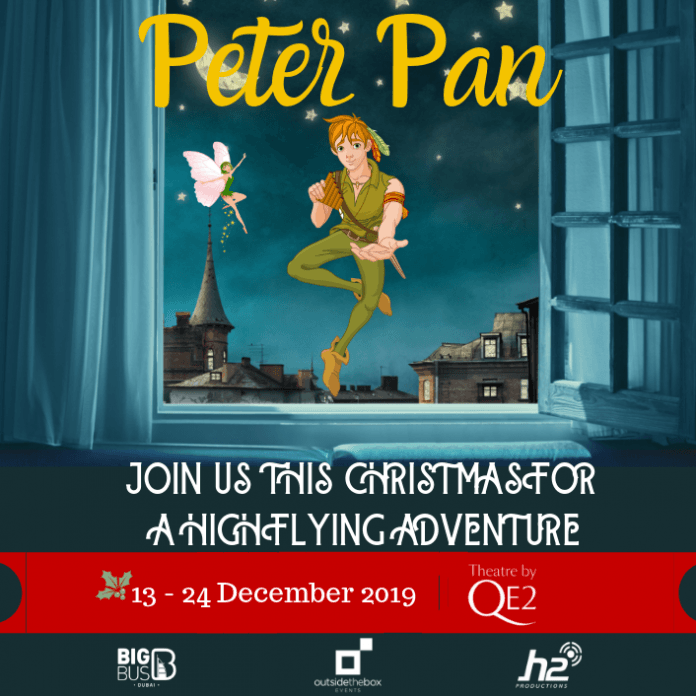 From Friday 13th December until

A classic Christmas show – flying onto the QE2 for the Festive season, Peter Pan, Tinkerbell and all the cast bring you an amazing and magical adventure.

Join our high-flying hero – who refuses to grow up – as he transports Wendy, John and Michael to Neverland on a journey they will never forget.

Meet the evil Captain Hook, his pirates and all of the lost boys as we set sail for the ultimate pirate pantomime adventure.

…and don’t forget to clap your hands for Tinkerbell…

As a special treat we are having “Grandparents Day” for visiting Grandparents (or Aunties or Uncles, who are holidaying here too!) – where the Grandparents get a 50% discount on Sunday 22nd December when they accompany their Grandchildren to the show. Check out the Theatre by QE2 Facebook page or Twitter or Instagram for the special code – which will appear in early December.

NOTE: This is for the shows on Sunday 22nd December only.

The QE2 in conjunction with Theatre by QE2 is also hosting “Tea with Tink” in the QE2’s Yacht Club, where parents and children can enjoy a themed afternoon tea with guest appearances from Tinkerbell, Peter, Captain Hook and all the other characters. This will take place on 14th, 20th& 21st December only!

On September 20 1967 at John Brown’s shipyard on Clydebank in Scotland, Queen Elizabeth the second named the QE2 after her mother in the company of Prince Phillip and 30,000 spectators. On 2 May 1969, she made her maiden transatlantic voyage.

In her lifetime, the QE2 would complete 1,400 voyages, sail some 6 million nautical miles and play gracious host to almost 2.5 million passengers. She would complete 25 tours around the world and, after 39 years, retire in 2008 to join Dubai as a prized and prestigious attraction.

Today, 50 years after her maiden voyage, the QE2 has been lovingly restored to her former glory. Permanently docked in Dubai’s Mina Rashid, the floating museum, hotel, dining and events destination offers a selection of restaurants and bars, 224 comfortable rooms and suites, QE2 Spa, Theatre by QE2, Dubai Duty Free shopping arcade and an eclectic selection of meeting and event spaces – including a spacious pavilion, grand lounge and a classic 1960’s ballroom.

Passengers can embark on a fascinating journey through the QE2’s history with an onsite interactive heritage exhibition showcasing actual and replica artifacts of her earlier years.