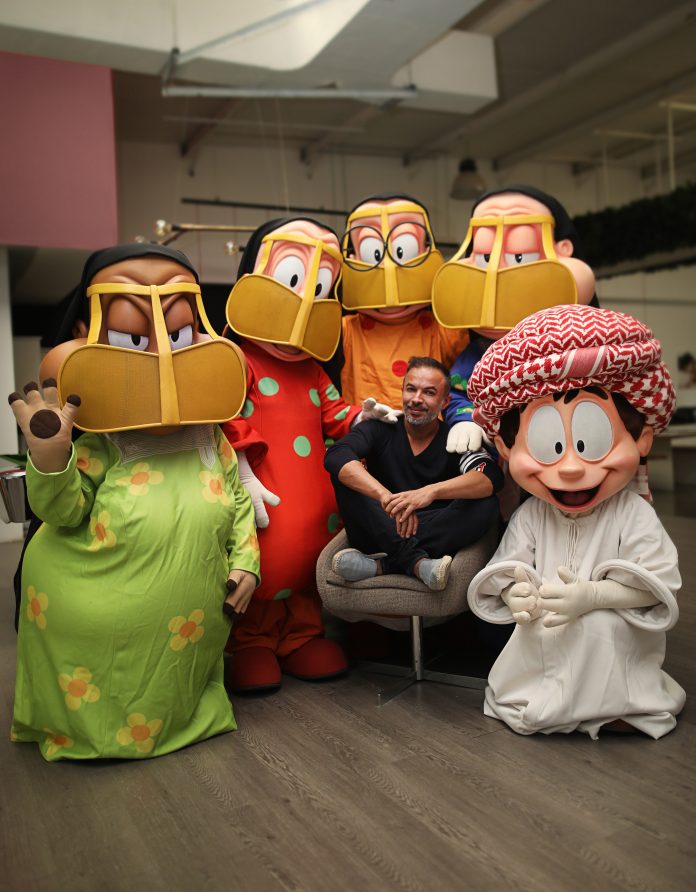 Prominent animation director Mohammed Saeed Harib cartoon creations are favourites with all members of the Emirati society. His computer animated TV series Freej, which launched in 2006, tells the tale of four old Emirati women living in a neighbourhood in modern Dubai. Fusing tradition, heritage and with a good dose of comedy and fun, Freej’s popularity established Harib as a creative genius with a powerful imagination.

His success was not only at home in the UAE, Freej reached international acclaim and this year, it became first Arab cartoon to be dubbed into Japanese and screened in Japan, making Harib something of a cultural ambassador for the UAE and Arab world.

Now, Mohammed Saeed Harib has collaborated with Dubai Culture and Arts Authority to produce a series of limited edition social media filters for Instagram based on his characters. Through this innovative partnership, produced on the occasion of the 48th National Day of the United Arab Emirates, Dubai Culture is promoting Emirati heritage in an entertaining, fun and interactive manner. Harib has harnessed the nation-wide passion for his legendary characters as well as using the digital language of the youth to creatively safeguard heritage in this unique and trendy manner.

Dubai Culture is committed to shining a light on talented individuals within the community as well as supporting the development of creativity. Through this distinctive concept, which directly approaches the young minds of the UAE, Harib has proved his presence as a cultural and creative pioneer.

Mohammed Saeed Harib said: “This year, I collaborate with Dubai Culture on the occasion of UAE National Day in a new and innovative way. The cultural landscape of our country is constantly changing and renewing itself, so we must also adapt with each new generation. Our mission is to keep pace with these changes to present our culture and heritage in a creative manner to best reflect our ways of life to citizens, residents and tourists alike.”

Harib also said that his cartoon series Freej was an ambassador of heritage entertainment and reached the hearts of the public through adults and children. Taking the characters and representing them on different platforms was a creative adventure for him.

“I do not wish for Freej to be contained only in a TV series,” Harib continued. “The augmented reality technique used on platforms such as Instagram allow the user not just to see their favourite characters but to create them in front of their eyes. This creates a spirit of fun and happiness as well as instilling a sense of belonging to our nation into the hearts of whoever uses the filters.”

The award-winning animation director added that this collaboration with Dubai Culture offers the new generation a chance to learn about the importance of heritage derived from traditional local outfits. The filters, launched on November 28, are available for 10 days until December 7 and can be found by following Dubai Culture on Instagram, after which the filter will be available in the user’s story settings.

Finally, Harib praised the new vision and inspirational leadership within Dubai Culture’s new creative roadmap for the Emirate. “Dubai Culture is a pioneer in discovering the latest ways and means to deliver culture and rich content through its various platforms. Through this cooperation, we will promote our national identity and also inspire young people to think creatively. There is no better occasion than National Day upon which to launch these new filters, which also coincides with the launch of the new Freej account on Instagram.