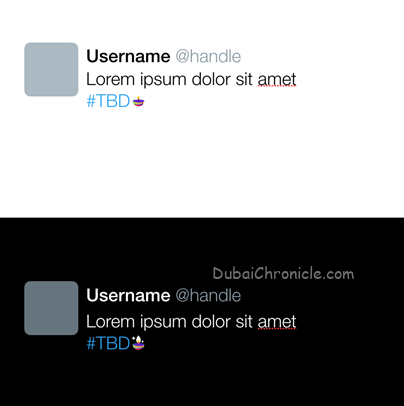 Indians across the UAE and the world are in the festive mood with Diwali or Deepavali just around the corner. Every year, Twitter creates a unique emoji to surprise and delight people on Twitter, and this year the platform is allowing those celebrating to control how high the diya’s flame burns during the festival of lights!

The emoji, which is a diya or oil lamp, when viewed in the light mode will appear with a small flame. However, keeping in line with the spirit of the festival of lights, audiences can have the flame burn brighter by switching over to Twitter’s dark mode. The specially designed emoji will add to the Diwali cheer and illuminate Twitter timelines when they switch to dark mode.

Twitter’s dark mode consists of two variations, “dim” and “lights out”. The former is already available across Web, iOS and Android, while the latter has been available on Web and iOS, and rolled out on Android this Tuesday. “Lights Out” mode can save battery life on those devices with OLED screens, improves readability at night, and also increases accessibility for individuals with specific types of visual impairments.

The emoji will be available until the 29th of October, and will render in eleven languages including Bengali, English, Gujarati, Hindi, Kannada, Malayalam, Marathi, Punjabi, Odia, Tamil and Telugu allowing a diverse set of people to celebrate #Diwali and join the public conversation. Here are the hashtags that will make the emoji appear: #শুভদীপাবলি, #Deepavali, #Diwali, #HappyDeepavali, #HappyDiwali, #શુભદિવાળી, #दिवाली, #दीपावली, #शुभदीपावली, #ದೀಪಾವಳಿಹಬ್ಬದಶುಭಾಷಯಗಳು, #ദീപാവലിആശംസകള്‍, #शुभदीपावळी, #ਦਿਵਾਲੀਮੁਬਾਰਕ, #ଶୁଭଦୀପାବଳି, #தீபாவளிநல்வாழ்த்துக்கள் and #దీపావళిశుభాకాంక్షలు.

Manish Maheshwari, Managing Director, Twitter India said, “Every festival, Twitter comes alive with joyful conversations, enabling people and businesses to connect with what’s happening — and during Diwali this is especially true, as Indians across the world Tweet about their celebrations. In line with our tradition of engaging people in this conversation, as well as delighting them with innovations, we have launched a ‘Lights On’ diya emoji to represent the joy of the festival of lights.”

Twitter celebrates India’s diverse festivities on the platform by delighting its users, and engaging them in conversation. Join in by Tweeting with the hashtag, and have a #HappyDiwali!