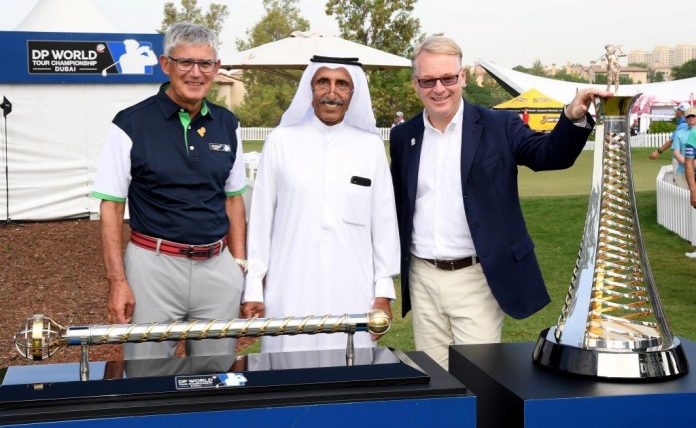 H.H. Sheikh Saeed bin Mohammed bin Hasher Al Maktoum, sponsor of the European Tour in Dubai, led the celebration of the tenth anniversary of the DP World Tour Championship and the Race to Dubai with a visit to the Earth course at Jumeirah Golf Estates on Saturday.

His Highness was given a Tour of the venue and met with a host of people involved in the tournament including European Tour Chairman David Williams and European Tour Chief Executive Keith Pelley.

“It has been a pleasure to be sponsor of the European Tour in Dubai and I congratulate everyone who has played a part in the success story that is the season-ending DP World Tour Championship, and the Race to Dubai,” said His Highness who, as Chairman of WSP Global, will next year be celebrating the 20th anniversary of the company which publishes Worldwide Golf magazine and European Tour Official Tournament Programmes, and is the press and PR arm for golf and the European Tour in the Middle East.

“We have worked closely with the European Tour over the years in helping to grow the game of golf in Dubai and the United Arab Emirates, and expanding the Tour in the region.

“Our relationship has grown stronger throughout the years and has assisted in creating a number of new tournaments on not just the European Tour, but the Challenge Tour and the Staysure Tour too.

“Our combined efforts have enabled us to market the emirate as a world-renowned tourism and golf destination, sending the message around the globe that Dubai is a must-visit place for sport, families and business.”

Keith Pelley said: “Dubai is an integral part of the European Tour and we greatly value our relationship with His Highness, Sheikh Saeed, who has been a great friend and supporter of the Tour over many years.

“The Race to Dubai has facilitated a worldwide interest in Dubai and the UAE and is the perfect time and place to host the climax of the European season where the top 60 players battle it out for this great Championship and the honour of being crowned European Number One.”