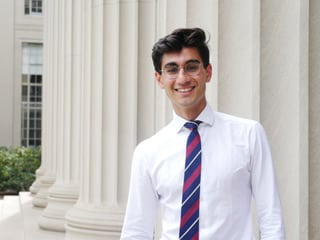 An Abu Dhabi teen launched CareerFear, a free online resource designed to help high school students in the UAE discover their future careers, in 2016. Since then, the website has gotten over 30,000 hits, and has launched new services that have worked directly with over 5,000 students in the UAE and around the world.

Tanishq Kumar, a 17 year old high school student, says that the non-profit service has gotten so much attention, and has a team of over 50 volunteers in 13 cities around the world, based out of the UAE, and wants to fight educational inequality around the world.

“Most students go to schools that don’t have strong careers departments and counselling, and that’s incredibly shackling” says Tanishq. “Most of us are constantly asked about future aspirations, but we don’t really know much about what it takes to become a doctor, a lawyer, or anything else for that matter” the young founder believes.

CareerFear hosts workshops at high schools around the UAE and in its branches around the world, hosting professionals like surgeons, actors, professors, engineers, who talk to and educate high school students about their jobs and careers. Recent workshops have been hosted at Brighton College Abu Dhabi, Horizon Private School, and several others.

To provide these services, CareerFear has collaborated with prestigious institutions like NYUAD, the London School of Economics, Imperial College London, and several others.

A study from IPSOS found that two-thirds of all high schoolers are worried about pressures to do well in college and choose an appropriate career path. This is especially pressing as students go back to school, and many students start applying to university and making important careers decisions.

CareerFear has a team of 8 students in Dubai and Abu Dhabi that lead the national branch to host workshops at schools and promote educational equality.