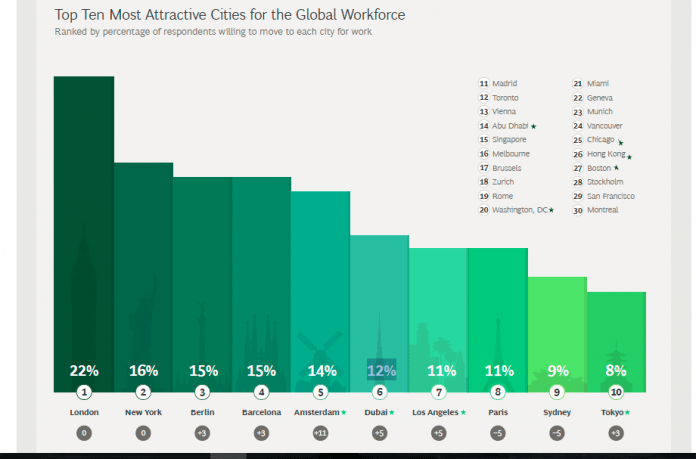 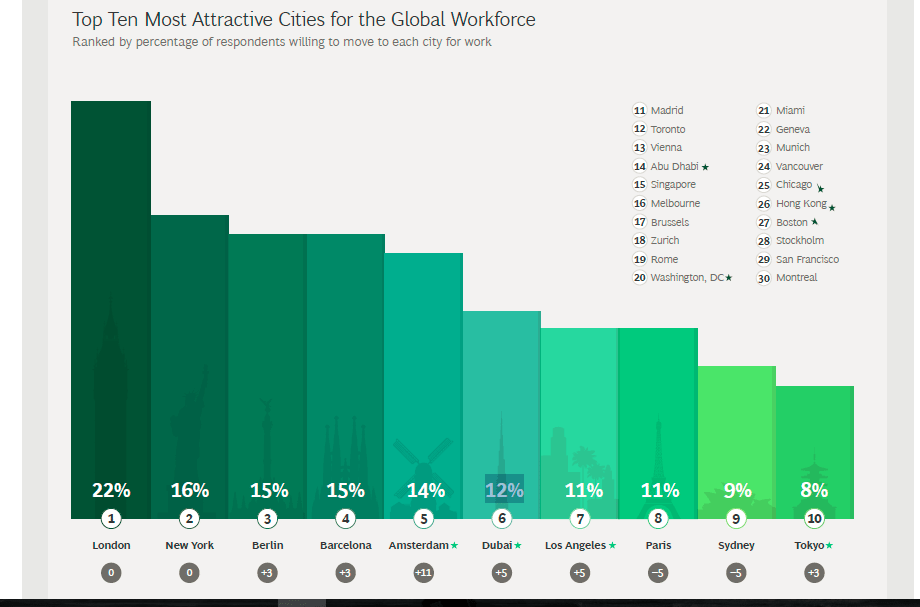 People’s willingness to move abroad for work has fallen in the last few years, weakening one of the solutions that countries and companies use to address their workforce problems, according to a new study by The Boston Consulting Group (BCG) and The Network. The study also found that, overall, workers continue to be more focused on intrinsic workplace rewards, such as those provided by good interpersonal office relationships, than on compensation.

A report based on the study, Decoding Global Talent 2018, is being released today.
Fifty-seven percent of all workers now say they would move to another country for work. While that is a sizable number, it is almost 7 percentage points lower than in 2014, the last time BCG (one of the world’s leading management consultancies) and The Network (a global alliance of more than 50 leading recruitment websites) asked the question. The decreased enthusiasm for emigrating is one of the more striking findings of the study, which involved 366,000 workers and 6,000 recruiters in 197 countries and took place against a backdrop of heightened debate over immigration and trade in many countries.

Those debates appear to have influenced respondents’ thinking about many traditional work destinations, causing some destinations to increase in popularity and others to diminish. Even countries whose overall ranking didn’t change have undergone a reassessment with would-be emigrants in certain regions.
For instance, even though the US is still the world’s most popular work destination overall, it is now less attractive—amid the volatility of its national politics—to people in Mexico and to those in a dozen other countries where it was previously the number-one choice.

Dynamics That Drive the Rankings

Germany’s rise to the number-two spot comes at a time when other European countries—notably the UK and Switzerland—have themselves become more cautious about immigration. This has cast Germany, with its relative openness, in a more favorable light and boosted it over its European rivals in the rankings. Germany is now three places ahead of the UK, five places ahead of France, six places ahead of Switzerland, and seven places ahead of Italy.

“Germany is turning into a real talent magnet,” said Rainer Strack, one of the authors of the study and a senior partner at BCG. “Its number-two overall ranking tells only part of the story. Germany is also number two for people under 30, people with master’s degrees and doctorates, and people with digital expertise. These are cohorts that every country wants and that are particularly important in Germany because of the demographic challenge of an aging population.”

And it isn’t only Germany, the country, that has risen as a work destination. The survey also shows a rise for the startup hub of Berlin, which is now the third most popular city for work, up from sixth in 2014.

Political change may also explain the lower ranking of the UK now versus in 2014. The UK has fallen from second among work destinations to fifth today.

“Making a decision to pursue work in a new country is very personal,” said Mike Booker, the managing director of The Network and a coauthor of the report. “But there are larger forces too, including uncertainty about future government policy. Interestingly, we have found that cities can have brands that stand apart from their country’s brand, and this is what we have seen in the UK. While uncertainty in the UK may have been one of the reasons the country dropped in popularity among international workers, London continues to be the first-choice city for talent worldwide.”

New York is the number-two city destination, after London and before Berlin—showing the preference for well-known cities of the West. But cities in other regions are starting to attract notice, the survey shows. Dubai (the most populous city in the United Arab Emirates) is now a top ten city work destination, and Abu Dhabi has moved sharply up the rankings too. Hong Kong is another non-Western city whose popularity increased in the last four years.

Where Mobility Has Fallen and Where It Has Risen

The falloff in outbound mobility is particularly evident in some emerging economies. For instance, only 33% of Chinese are now willing to leave their home country for work. That represents a dramatic decline from 2014, when Chinese mobility was 61%, within a few percentage points of the world average. Chinese workers are now near the very bottom for mobility among the 197 countries surveyed.

Workers in Poland, Croatia, Slovenia, and Romania are now also below the mobility average after having been above it, by wide margins, in 2014. These are among the Central and Eastern European countries whose economies have taken off, creating much better job opportunities for people who live in them.

And demonstrating the complex dynamics of mobility, the study also identified roughly a half-dozen highly populous countries where people are actually more interested in going abroad for work now than they were four years ago. People in India and Brazil are in this category. So are people in the US and the UK, where the greater openness to emigration may itself have a geopolitical component.

There are also types of workers whose willingness to move abroad is above the average. For instance, 67% of people who are expert in areas like user interface design, mobile app development, and artificial intelligence or machine learning say they would be willing to move to a new country for the right job, the survey shows. That’s 10 percentage points above the global average.

The Emphasis on Relationships and Work-Life Balance

In addition to the shifts in the world’s willingness to work abroad, the survey also highlights another reality for companies: the emphasis that workers globally put on good relationships with colleagues and superiors and on issues surrounding work-life balance. The emphasis on these “softer” job elements—versus financial compensation, which ranks a relatively low eighth among all job satisfaction factors in the world—hasn’t dissipated since our 2014 survey. And it will force companies to make changes if they are to continue to amass the skills and attract the types of talent they will need in the future, the report’s authors say.

However, there are variations in job satisfaction factors by country and region. For instance, job security is generally not a top concern in Western Europe, where worker protections are fairly common. But it is the number-one concern in Indonesia and Malaysia.

Likewise, career development is low on the list of people in many mature economies. But it is the top priority to people in countries whose economies and business practices are at an earlier stage, including China, India, Morocco, and Turkey.
In addition to the report on global trends, BCG and The Network have also published detailed reports on the changing work attitudes in eight countries: China, France, Germany, Russia, Switzerland, Turkey, the UK, and the US. A copy of the full report can be downloaded here.

The extensive data gathered for Decoding Global Talent 2018 provides insights into worker attitudes by gender, marital status, education level, salary level, level of digital skills, and position in the job hierarchy. This data will be at the core of a series of additional publications growing out of Decoding Global Talent 2018 that BCG and The Network will publish in the coming months.