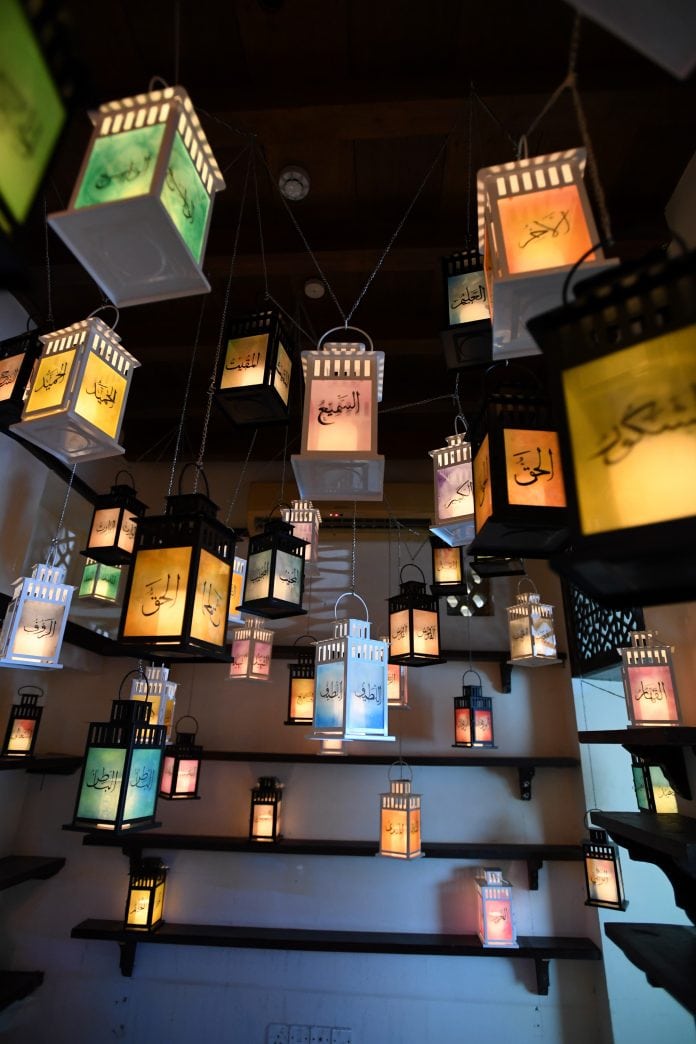 SIKKA Art Fair 2018, a flagship event of Dubai Art Season held under the patronage of Her Highness Sheikha Latifa bint Mohammed bin Rashid Al Maktoum, Vice Chairman of Dubai Culture, is the first annual initiative of its kind focused on supporting and showcasing Emirati, UAE and GCC based artists, and features a ‘House of Islamic Art’ for the first time during its eighth edition.

The house includes a dedicated section for Yoshita Ahmed’s lanterns, covered in silk, with the 99 names of Allah painted on them and hung from the ceiling in a beautiful installation. Another contains a ‘Tawaf’ exhibition of contemporary Islamic Art by Siddiqa Juma in collaboration with The Ajala Project, including a virtual reality experience that transports visitors to a world of coordinates circumambulating the Kaaba in Mecca.

Al Serkal Ceramic Division is showcasing the art of painting with Islamic zakhrafa and calligraphy via an exhibition and live painting sessions, while Khashab Design is displaying geometric patterns on wood and a video showing how they are created by the company’s founder and craftsman Miaser Al Habori. Other displays feature Islamic-inspired furniture created by artist Zahra Valji for Ayah Home, Islamic garden sample textiles by Bani Colak, and two walls of 3D effect calligraphy street art painted live by Diaa Allam. Jaber Al Haddad is also revealing how to create Islamic patterns and apply Islamic geometry in the present day via informative videos, time lapses, sketches and live painting sessions.

Islamic Art and Culture workshops are also taking place at the ‘House of Islamic Art’, including ‘Wood Carving with Geometric Designs’ led by Khashab Designs, ‘Islamic Art: Shapes of Infinity’ with Amin Tejpar, ‘Islamic Geometry’ from Jaber Al Haddad, ‘Calligraphy’ with Omid Rabbani, and a Qirtas workshop on its ‘Elephant Clock’, as well as three further workshops for children hosted by Bismillah Babies entitled ‘Discovering Your Senses’, ‘Be a Superhero’ and ‘Looking Around’.

This year, Dubai Culture has made it easier than ever before for the public to reach SIKKA Art Fair, reflecting the Authority’s commitment to involving all segments of society in the fair. Visitors can reach SIKKA via metro, car, bus shuttle, Careem, the S’hail app or even by abra for as little as AED 1 per trip. Dubai Culture is providing complimentary shuttle buses from the Al Seef by Meraas multi-storey car park to SIKKA, and has also worked with Careem to provide visitors with a special 15% discount on two rides when they book a taxi using the code SIKKA2018. The code is valid from 17th to 26th March 2018 for ‘now’ and ‘later’ bookings across all car types excluding GO, UNCHR and BOX, with a maximum discount of AED 20 per ride. Valet parking is also provided at the Al Fahidi Historical Neighbourhood on a first-come, first-served basis. For more travel information, visitors are advised to check www.rta.ae.

SIKKA Art Fair, which runs from 17th to 26th March 2018 at Al Fahidi Historical Neighbourhood, complements the city-wide activation of cultural events taking place during the fifth edition of Dubai Art Season, which runs throughout March and April 2018 and features events such as the Emirates Airline Festival of Literature, Art Dubai, DIFC Art Nights and the Middle East Film & Comic Con, among hundreds of other initiatives.