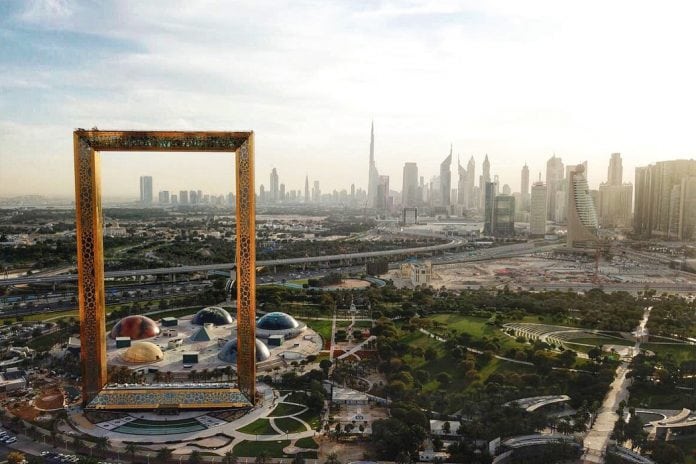 The UAE’s leading tourism and news website Hotelandrest.com has ranked the Dubai Frame as the most culturally significant landmark amongst those completed in 2017 in the world.

The Dubai Frame that opened on 1 January, 2018 in Zabeel Park has been touted to be a prestigious addition to Dubai’s iconic architectural portfolio. It is branded as an entertainment destination that offers its visitors a 360-degree view of both the urban and the more traditional parts of the city. Journey through the past, present and future of Dubai by exploring its heritage museum and picturesque projections that takes viewers through Bedouin life, camels and the infinite sands of the desert.

The entirety of the two transparent, glass towers are 150 meters long in height, and is connected by a 93-meter bridge, from which tourists and residents can feast upon the spectacular panoramic view speckled with wonderous towers and skyscrapers, comprising a skyline that competes with other renowned cities such as Hong Kong, Singapore and New York.

From a survey conducted by Hotelandrest.com, results indicate that the Dubai Frame beats out its competitors to being the most distinctive addition to the world’s wonders in the past year, an achievement credited to its stunning architecture and advanced engineering.

The Dubai Frame experience also houses a beautiful dancing fountain at the main gate, small souqs with Emirati stalls selling spices, and heritage artefacts, two cafeterias, an art gallery replete with augmented reality activated screens and a souvenir shop. The architectural team has taken inspiration from the times bygone and the promise of a better tomorrow, reflected in the Dubai Frame’s shape, design and in all its elements, making it the icon that it has gone on to become.

The Dubai Frame is open daily from 10am-7pm. Tickets are priced at AED 50 per adult, AED 20 per child between the ages of 3-12 years, and free for children below the age of 3, the elderly, people of determination and two persons accompanying them.